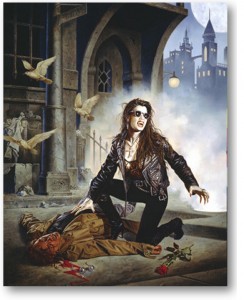 I know I am late to the party, the Vampire the Masquerade 20th anniversary celebration was last year. But I did not catch the anniversary bug until this year. My relation with Vampire is a complicated one. I was in college and gaming actively during the heyday of the World of Darkness. I played 1st edition, but never got the books, When 2nd edition came out I got them and played sporadically. These were also the heydays of Magic the Gathering and our sessions would always start late because someone wanted to play a hand of Magic.

Despite being primarily a Game Master during my years gaming, I was never a Storyteller for a Vampire game. One of the things I enjoy the most is playing my homebrewed world, and at this time we were playing AD&D 2nd edition. If this was the golden age for Vampire and the World of Darnkess, it was not for AD&D. I worked at a FLGS and whenever I talked about my AD&D game with some RPG fans I got this weird condescending look, as if I was still playing child’s games instead of engaging in immersive storytelling. I felt disdain for the game I played. I don’t know what your experience was but I felt a lot of World of Darkness gamers were snobs, their game was better than anyone else’s.

This turned me off somewhat. Still my close friends and acquaintances were not like that; they continued to play my AD&D 2nd edition game and invited me to a few Vampire games. The one I probably enjoyed the most was a short lived chronicle run by my friend Karlo, who based the game here in Puerto Rico, and I got to play this bloodthirsty Gangrel biker. Great fun!

The other Storyteller I knew that played a regular chronicle was Ray. He was a very popular WoD Storyteller. Everybody wanted to play with him and that was a problem. His sessions had hundreds of players! Ok that’s an exaggeration, it might have been ten or twelve, or at least it seemed that many. And Ray was a great Storyteller, giving each player time in the spotlight, his games allowed people to explore the plotlines that interested them BUT there were just too many people playing. I once spent an entire night with the group and only got to play for about 30 minutes.

The other thing I did not like was plethora of WoD characters. The group had Vampires, Werewolves, Mages, even a Highlander-like character from some supplement I can’t remember. With such a diverse group motivating all this disparate characters, some that hated each other, was a daunting task. I really did not stick around for the chronicle.

Despite all this stumbling blocks I still had the desire to run the game. What was my biggest deterrent? The metaplot! Most of the people I knew who wanted to play were HEAVILY invested in the game, knew all the plots, read all the books. Of course you’ll say “It’s your game, ignore what you want, make it your game!” But this is easier said than done, to many of these people part of the fun WAS the metaplot and jettisoning it a turn off. This is not a problem exclusive to the WoD, it can be just as hard to play with Forgotten Realms hardcore fans who know every NPC ever published.

So I put away my plans for a Vampire game and went on with my gaming life… I got the New World of Darkness books and kept abreast of the changes in the game, I just never ran it.

Then last year they announced the anniversary edition of Vampire the Masquerade and my desire to run a World of Darkness game came back.  The Vampire as a literary and cultural icon intrigues me. I am a fan of Bram Stoker and while I am NOT a fan of Anne Rice (I can hear the cry of heretic and the mob with torches and pitchforks at my doors), I do like the mythology White Wolf established in the Masquerade. While I really liked Werewolf back in the day, Vampire was always a better fit for my style of play, intricate plots with lots of politics and backstabbing. I resisted the urge to get the collector’s edition due to the price, but when the PDF became available I jumped at the opportunity.

I loved it; it was a wave of nostalgia packed into an awesome product. Well worth the price even if it was steep for a PDF (like Michael pointed out in his post about VtM20). I considered finally running a Vampire game, and some of my players like the idea.  But I knew that with just the PDF it would not be feasible to run the game (or at least that was the excuse in my head) so I caved in an ordered the POD version. The full color, two volume one; the books are not yet in my hands, I just got the notification that they shipped, but the gears are already turning.

When I think about it long and hard, our group has a lot of games in the backburner. Our current Mutants & Masterminds Dawn of a New Age campaign, returning to our Pathfinder RPG swashbuckling campaign, an unnamed sci-fi game using Savage Worlds… Add to that Vampire the Masquerade. Yet I conceive of the Vampire game as a short campaign, perhaps eight to twelve sessions long, taking no more than 3 months.

From what I learned in all those WoD games long ago, here is how I will do things:

Not on that list, since I don’t think it’s a decision that would make or break a campaign, but it’s a personal choice, I will only use the Camarilla. I know many people adore the Sabbat but the secrecy and politicking of the Camarilla seem more interesting to me. I’m not saying the Sabbat will not exist, only that at the beginning all characters are in the Camarilla.

I will also advance the timeline a couple of years into the near future,  making it still recognizable, but getting rid of some real world pre-conceptions ,and giving it just a little cyberpunk/Blade Runner edge without making it sci-fi. Here is my pitch for a future Vampire the Masquerade game:

In 2020 after the last POWs of the Africa Wars had returned home and the celebration of President Yolanda Newman’s inauguration the United States looked with optimism to the new decade. This was not to be… The plague struck in New York and soon panic grew. Fearing a pandemic the city was placed under martial law and quarantined. Other major metropolitan areas were also quarantined but the infection was controlled quickly. Not so in New York. Millions were trapped inside the quarantine zone. Riots erupted, chaos ensued, more and more people died, and then the terrorist struck. A bacteriological weapon, believed to be the original cause of the plague, was released in the city and killed 96% of the people inside the quarantine zone. The city was declared a hazard, condemned and abandoned.

The plague was soon controlled and Mexico and Canada where the only countries with significant outbreaks. The US economy suffered a great setback, but President Newman’s initiative to rebuild the city of Wilmington in Delaware after the bombing of 2017 was a success. Soon the New York Stock Exchange moved to the rechristened Wilmington and the once almost dead city became New Ubar.

What the people don’t know, not even some of its leaders, is that the events leading up to the destruction of New York, the plague and the raise of a new metropolis in the eastern seaboard of the US were all the machinations of the Kindred. Specifically a member of the Camarilla, he created the plague, that did kill many humans, but also decimated many Sabbat gathered in New York through his machinations. The Cainites  have driven back the Garou who fight to save a dying world. The Mages have disappeared, but whether this is the action of their enemies or a sign of impending doom is unclear.

Come to the new city built by the triumphant Camarilla as they plot to impose their rule upon all the children of Caine… But in the bowels of the shinning new city a man stirs, he cannot remember his name, but his return foretells of dark time ahead.

That’s the gist of it; this would be the beginning of a short chronicle. I realize that this is my second post about a possible campaign, one after the other. I won’t bore you with further details, if there is interest in reading more about the planes for the game let me know, I may just follow up with another post.

PS- I fear there is some vitriol in this post, WoD fans as snob, dismissing Anne Rice… None of it is meant to insult everybody, I am not saying EVERY WoD fan is a snob, I just ran into some of them, just like I know hardcore D&D 4th edition fans… But those have no excuse!

I kid my friends, all in good fun; enjoy the game, whichever one you play!