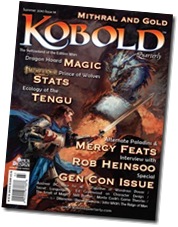 Recently Open Design LLC decided to give away KQ #14 for free. Just go to the Kobold Quarterly store and use the code “KoboldWelcome” at the checkout! This offer is valid until February 14th 2012. So what are you waiting for? Get you free copy now. It’s definitely worth it!