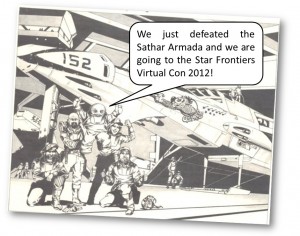 I am a longtime fan of Star Frontiers, I’ve written about it before, and every now I then I visit the fan sites still supporting the game. Imagine my surprise when I discovered this, the Star Frontiers Virtual Con 2012!

Imagine my surprise when I realized my first sci-fi game turns 30 this year… Now I understand the white hairs. I didn’t start playing it in 82, heck I was not playing RPGs back then. If memory serves I picked it up in 88. I played that game so much, it was one of my longest running games, my longest running sci-fi, the game where I first tried running two separate campaigns that influenced each other. I did a lot of experimenting and developed many of my DMing skills with Star Frontiers.

Is the game prefect? No, it definitely shows its age, and despite the enthusiasm fans still have for it, I wonder if I could run a campaign using the system. I would definitely run a pickup game, or participate in one. That’s why the concept of the virtual con intrigues me. I want to participate, and while it sounds interesting, the registered participant’s page only lists two people. Still I’m intrigued and if time and the new class schedule allows I may just join them.

If you are a fan of Star Frontiers, check it out!

I voted in the ENnies!