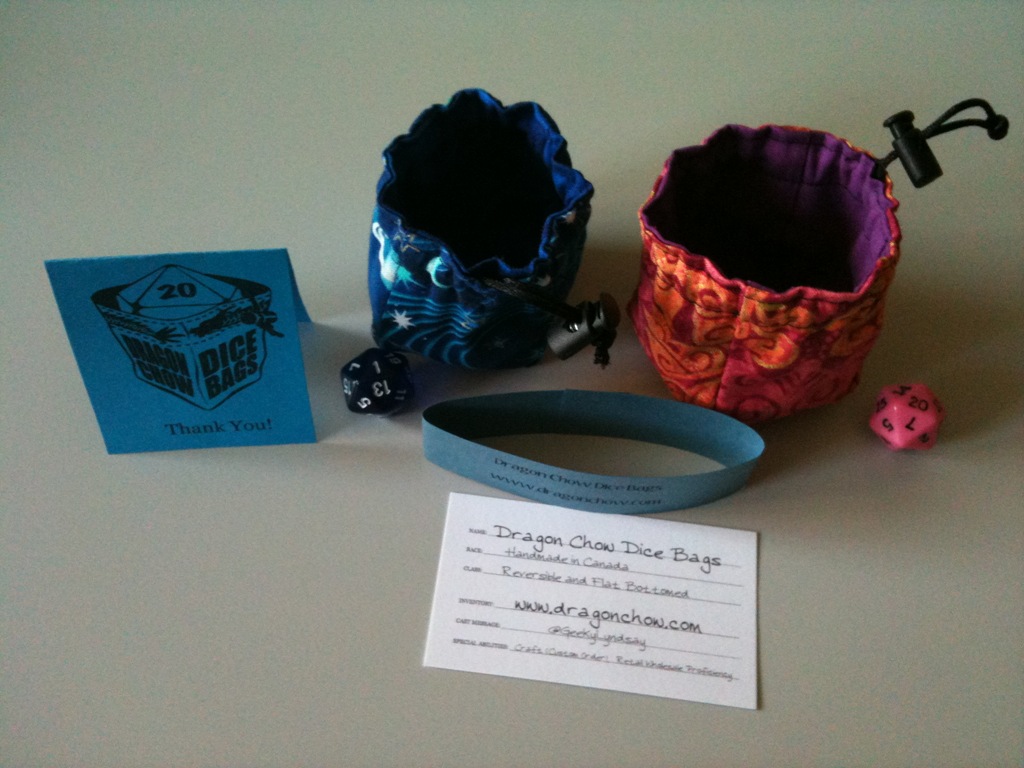 Recently while looking for a geeky gift for my girlfriend I stumbled upon Dragon Chow Dice Bags. We both had leather dice bags for quite some time now, but this time I was looking for something different. And Dragon Chow Dice Bags are different for sure. They are beautifully handcrafted, flat-bottomed and fully reversible bags complete with a drawstring. And as far as I’ve seen each dice bag already contains a matching d20.

Lyndsay, the owner of Dragon Chow Dice Bags, crafts not only standard dice bags (4” x 4” footprint, 5” tall), but also Teeny Tiny Dice Bags (which hold up to 14 dice), Tall Pencil Strap Dice Bags (which are tall enough to hold pens and pencils) and even custom ones designed by the customers.

When unpacking my order I immediately noticed the great quality of the dice bags. These bags are really a labor of love. The Deep Space bag currently holds the translucent blue d20 that came with it and my Wizard Fudge dice from Evil Hat. Even with all those dice in it it still closes neatly.

Prices for the dice bags are pretty reasonable with $6 for a teeny tiny one and $12 for a regular sized dice bag. After using the tiny dice bag for a while I have decided to order a standard dice bag now, to hold my regular dice, too. From a practical and aesthetic standpoint the Dragon Chow bags are much superior to my old leather dice bag.

If you’re looking for a new dice bag or a gift for a gamer who already owns pretty much everything, you definitely should check out Dragon Chow Dice Bags. You won’t be disappointed!

A Look At Mörk Borg