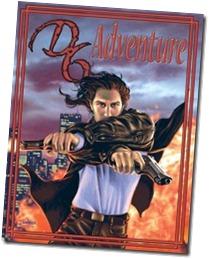 WEG also released a couple of other games based on popular licenses like Indiana Jones, Men in Black and the Hercules & Xena TV series. The Hercules and Xena game actually used a simplified version dubbed the Legend system. But even these popular licenses couldn’t save WEG from bankruptcy.

But the D6 System never got widely popular again and in the end we – the fans – are lucky that the last owner of the D6 System decided to release the games under the Open Game License. The D6 Systems core books are all available for free on DriveThruRPG and even Bill Coffin’s Septimus, the first game released under the new OpenD6 label was eventually made free by its creator.

I am still thankful to Eric Gibson, owner of WEG, that he decided to give the D6 System to the fans, even though I didn’t agree with him most of the time. I still remember a few quite heated discussions with him on the WEG Fan Forums back in the day.

So why should gamers care about the D6 System? There are multiple reasons: First and foremost the system is very easy to learn and to use. It’s perfect for new players. It just uses regular six-sided dice, the core mechanic is easy to understand. The fact that it’s now available for free means that you don’t have to pay a lot of money to get the rules.

While pondering what games I could run in the future, I eventually gave the D6 system a second look and realized that I can use it to easily run games in most settings and genres with just minor adjustment. Each D6 genre book comes with it’s own supernatural effect systems. D6 Space has Metaphysics, which reminds me a lot of the Force from the old Star Wars RPG, D6 Adventure has Psionics and D6 Fantasy has spell-based Magic. But nothing keeps you from using Magic in your Space games.

The D6 System is easy to learn and to run, versatile and available for free. And even today it deserves our attention. But it’s my impression that aside from a few die-hard fans the majority of gamers have forgotten the D6 System. Which is a shame.