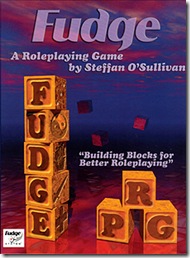 Recently when I was looking for an idea for a blog post, #stargazersworld regular and Fudge enthusiast Jonas “fudgebob dicepants” Susara came up with the idea of the “Fudge Roll Call”. Fudge is one of those games that aren’t that often in the limelight nowadays. But both Jonas and I believe that there are a lot of dedicated Fudge fans out there.

So this post calls out to you Fudge fans out there! Please let us know when you are out there, and tell us if you have written, designed, GMed,or played Fudge before. When did you first come into contact with Fudge and what did you like about it. You get bonus points if you tell us a bit about what you’ve done with Fudge so far!

Please share your comments below! As always your feedback is highly appreciated!