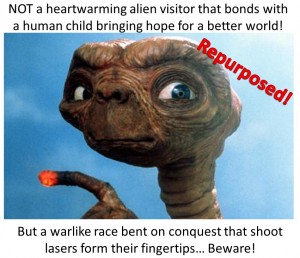 If you read my post here in the blog regularly you’ll know I have been planning a sci-fi game for the longest time. I’ve written about it, even posted a possible campaign background. Whether I end up using that, a variation or something completely different, there is one thing I love about sci-fi, aliens! You might love then or hate them but they are definitely a staple of the genre.

I have played games like Star Trek and Star Wars with their myriad, seemingly endless, litany of race. My latest campaign ideas call for a very human centric campaign. There will still be aliens but very few and mostly in the background. But whether I go big or small, whenever I begin to design a campaign I run into the same stumbling block, the aliens.

Yeah I know, it’s a love hate relationship… Here is my rationale. I love designing my own campaigns and dislike pre-packaged settings. In a sci-fi setting I love designing alien cultures because they give me a chance to explore a wholly different outlook, build new societies. However I am a big believer in pictures speaking louder than words, so I typically need to find an image to represent the new alien race.

If you think my writing skills could be better, you haven’t seen my drawings! I am incapable of illustrating the alien races in my mind. I have tried some workarounds, adapting aliens from other media like comics, TV, film, even video games, but I typically find that if the players know them they immediately associate the characteristics from their source of origin rather than the ones I’ve developed for them.

I’ve tried using images found online (for personal use, no copyright laws where hurt writing any campaign!) but typically there is one image for the alien, and I love having NPC images during games and it is really hard to believe ALL aliens of the species look exactly alike. So there is my conundrum, I want original looking aliens I can insert into my campaigns. I’ve thought about commissioning some artist, but wonder if the campaign warrants the expense.

So what do you do for your sci-fi campaigns? Do you like aliens in them, and how many? Do you repurpose existing aliens or create your own? Are there any artist reading this willing to do commissions? Dear reader I’d love your input on this…