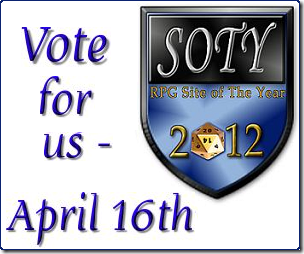 Like last year Stargazer’s World is participating in Stuffer Shack’s RPG Site of the Year contest and we are honored to be among all the great sites that have been nominated.

The nominated sites have been put into one of five groups for voting and today (and only today)  you may pick your personal favorite from the group we’re in. So if you enjoyed our site for the last three years it would be great if you could give us your vote and please share this news with your friends over your favorite social network.

After the General Voting the judging panel will evaluate the semi-finalists and determine the overall winner.

The team of Stargazer’s World wishes all participating sites the best of luck. May the best one win!

P.S.: Due to the difference in timezones it may be that the voting site is not up when this post goes live. So if you want to vote and the above link doesn’t work yet, please check back later.