Some time ago I was invited to a Pathfinder game run by a friend of a friend. I wasn’t certain how things would work out; I had attempted to join a game some time last year and my schedule didn’t permit me to play very often so I dropped out. The only copy of the rules I owned was a PDF of the Core Rulebook I purchased from Paizo before the ill-fated game. After speaking with the GM I knew I wanted to play an alchemist or a witch, so I went the extra mile and got a PDF of the Advanced Player’s Guide as well.

The game is going well. Thing is, it took me three sessions to make my character. I knew his name and his base attack bonus and things like that, but all the fiddly bits like feats and skill points were a bit up in the air. I also wasn’t as comfortable with combat as I should have been. Every time I threw a bomb I found myself checking the “Throw a Splash Weapon” section of the Core Rulebook.

Each time I did, I would reach for another player’s copy of the book.

PDFs of roleplaying games are everywhere. Thanks to sites like DriveThruRPG they are accessible and affordable alternatives to hard copies of the books, and it is possible to find things that are no longer on store shelves. I myself have a pretty hefty folder of them that I acquired during a year abroad, which satiated my RP needs at the time. There is no doubt they provide a great convenience.

Yet, at the risk of being a Luddite, they simply don’t work for me at the game table. For Pathfinder, they haven’t even worked too well for me away from the table. PDFs are great for getting an overview of a game, or learning the basics, but I don’t absorb the information the same way I do when I have a physical copy of the book in front of me. It’s not just a technology gap, either; I own a NOOK that I use often. 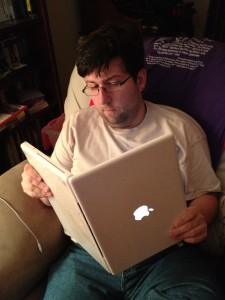 Why isn’t this working?

Trying to reference anything in a PDF is a pain. Scrolling is slow. The search function takes time, and doesn’t always get me where I want. I can page through a book quickly, and I’m skilled at using indices. I imagine a tablet would resolve several of my issues, but I can’t afford one right now, and even then you still have to zoom in to read text. The layout for most RPG books is much larger than your average paperback. All that zooming and scrolling distracts me from the experience of the book itself. On the other hand, the typical eReader displays all its text on one screen and requires only the click of a button to progress.

I can’t argue that PDFs have their place in gaming. I got my first PDF when Monte Cook’s Malhavoc Press was new and released the Book of Eldritch Might to an uncertain digital market. I’m glad to have the titles that I do. At the table, though, PDFs just can’t beat a good book. I recently picked up both the Core Rulebook and Advanced Player’s Guide for Pathfinder in paper form, and since then my comfort with the rules has improved. I sit down with the books in my spare time and I read them. I am spinning the starting threads of my own campaign that may or may not see play. All-in-all, I am having fun.

How about you? Are you on board with the digital revolution, or are you still holding a buggy whip like me?