We are breaking our regular schedule for some Kickstarter news. Two days ago Chris Birch started the “Achtung! Cthulhu – The WW2 Keeper’s & Investigator’s Guides” Kickstarter project. In 50 days he tries to raise £8000 in order to pay for the development, artwork and production of a full print run of both the Achtung! Cthulhu Investigator’s Guide and the Keeper’s Guide. The basic goal of £8000 will pay for the Call of Cthulhu version, while a further stretch goal will pay for the Savage Worlds version. 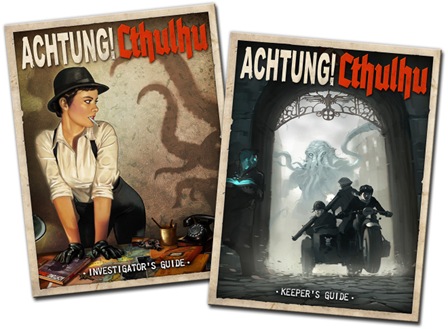 If you are unfamiliar with the Achtung! Chtulhu setting, check out my review of Achtung! Cthulhu – Three Kings, the first adventure in the Zero Point campaign. In a nutshell Achtung! Cthulhu combines the real horrors of WW2 with the supernatural horrors of H.P. Lovecraft’s Cthulhu Mythos. In my opinion that’s a match made in heaven hell!

The various pledge levels are quite reasonable, although I find £10 for shipping within the EU for quite steep. The other thing that bother me is that you have to pledge at least £40 (which buys you print copies of both books) to get every PDF funded by the Stretch Goals. But that’s only a minor quibble.

Overall I am very excited about this project and I hope it will reach a couple of Stretch Goals in no time.