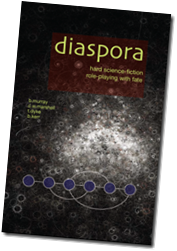 After a long hiatus I’ll finally be running a new roleplaying game campaign again. On the weekend I met with my group and made the proposal to play Diaspora, VSCA Publishing’s Hard-SF Fate-based game. My players have never played Fate before, but after me explaining the basics of the game they were interested to try it out. Alas they were not so fond of the Hard-SF nature of Diaspora.

The other aspect of Diaspora they were alas not excited about Diaspora’s cluster creation. When I first told them that I was thinking about running a SF game they were – unbeknownst to me – hoping for an exploration based game. While I don’t necessarily see a problem here, they felt that creating a cluster beforehand would make exploration harder, since they already feel they know what’s behind the next corner. 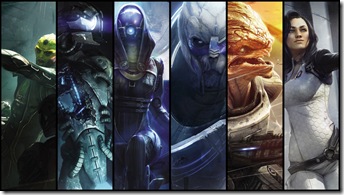 We discussed our options for a while and finally settled on using Reaganstorme’s excellent Mass Effect hack for Diaspora. They are all fond of the setting and the Mass Effect universe should offer enough space for exploration. But I’ve learned from the mistakes I made the last time I ran a Mass Effect game. Mass Effect works best if you focus on aspects of the setting that have already been explored by the computer games. If you stray too far from that, you might get into areas that have not been fully fleshed out yet. In our case this lead to quite a few unanswered questions and a game that felt a bit too generic. This time I’ll make sure that places, organisations and characters from the computer game series will play a major role in the campaign. The players are interested in Mass Effect, so they are getting exactly that.

In order to make the Mass Effect universe a bit more suitable for the kind of game I have in mind, I’ll mess with the story line a bit. At the end of Mass Effect 2 Shepard destroys the Collector Base and the human Reaper. This causes the Reapers in dark space to awaken and they start descending upon the galaxy. In my variant of the Mass Effect universe the Reapers will either be asleep for a couple more years or it will take longer for them to reach our galaxy. Heck, I might even decide that they’ll never return. I want to focus on our stories without having to worry about a Reaper invasion in the near future.

We’ll probably meet again in about three weeks so I’ll have more than enough time to read through all the rules for another time, plan a first adventure and create a couple of locations and characters. I might actually use the cluster creation rules to create the sectors of space the player characters will be exploring.

Have you ever thought about running a game in the Mass Effect universe? Or do you have experiences with Diaspora? Please share your thoughts in the comments below.