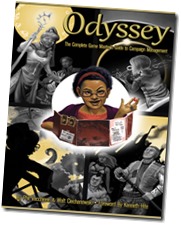 Odyssey is the latest book in Engine Publishing’s series of GM advice books. Engine Publishing was founded in 2009 by the people behind the exceptional RPG blog Gnome Stew. What sets them apart from other RPG publishers is that they currently entirely focus on bringing you great GM resource books that can be used with every game system and almost every genre. If you haven’t checked them out yet, you definitely should read my reviews of Eureka, Masks, and Never Unprepared.

So what is Odyssey all about? The 209-paged book written by Phil Vecchione and Walt Ciechanowski is supposed to help you manage a RPG campaign. Some of you might be surprised why “managing” is used, don’t we usually “run” campaigns? That’s actually one of the points the book is making: running a successful campaign needs a lot of management on behalf of the GM, and that’s what Odyssey is supposed to help you with. As Phil puts it “running” sounds as if the GM’s job is focused entirely on what happens at the game table, while “writing” makes it sound as if the GM was the only person who has creative input on the campaign. A lot of campaigns fail in the long run, because GM’s don’t see themselves as managers but focus too much on the running or writing aspects of it. 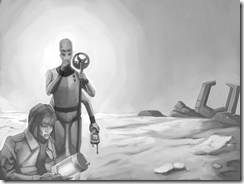 The book consists mainly of three major sections: Starting a Campaign, Managing a Campaign, and Ending a Campaign. Each section focuses on an important part of campaign management. For me the Starting Campaign was most interesting, mainly because I am currently having trouble getting a new campaign up and running. If you’ve followed my blog for a while you read about my failed attempts. Looking back I think it would have helped if I had access to Odyssey back when I thought about starting a new campaign. The authors explain the various ways how you can come up with a campaign concept everyone at the game table is comfortable with. Explaining each section in detail would probably be beyond the scope of this preview, so let me highlight a few things I found especially noteworthy.

An interesting detail that’s brought up in the Starting a Campaign section of the book is campaign length. A lot of GM’s dream of never-ending campaigns that players can enjoy for many, many years. Alas these campaigns are not that common, usually campaigns just end without a conclusion, because the players or the GM lost interest or moved on to other campaigns without ever looking back. The topic of campaign length is also an example for something this book does extremely well. It highlights the things that we all have encountered, issues that can cause a campaign to fail, but they discuss various ways to deal with it. Some of their tips might look obvious at first, but sometimes it helps when someone reminds us how things are best done.

The Managing Campaigns section contains several useful tips, that can help you run … ahem .. manage your campaign. A great tip is to create titles for your adventures. I faintly remember that this is something I’ve done back in the day, but for some reason I stopped doing this. Walt explains how naming your adventures can help to you to come up with new ideas, or make the adventures more memorable for your players. 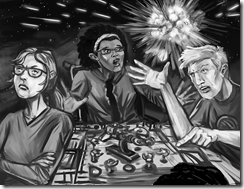 Another great advice given in this book is that you should perceive the first sessions in the campaign like a pilot for a TV series. Often the player’s ideas for the campaign and the background they created for their characters don’t work out when the campaign moves forward, so let them change things around during these first sessions. The same happens in many TV series where some elements shown in the pilot change or disappear in the actual series.

One of the highlights of the book is definitely Chapter 11: People Management. RPGs are a social activity and a certain chemistry between the players is very important for a successful campaign. In the end everyone should have fun, even the GM. The chapter gives a lot of advice on how to manage that aspect of gaming and deals with issues like kids (yes, gamers do procreate!), protecting your game from real life, and that guy.

I should also mention that the final PDF version of the book is supposed to be fully hyperlinked and bookmarked. Like all other Engine Publishing titles, Odyssey features a very extensive index, something which is missing from way too many RPG books these days.

Overall Odyssey is a great addition to the other Engine Publishing titles. Managing campaigns has always been a problem for me. I’ve played in a few campaigns that went on for years, but the campaigns I run usually end way to quickly, mostly because I messed up somewhere along the way. Odyssey looks like it might help me solve some of my issues, or at least push me into the right direction. In my opinion Odyssey is a must-have for all newbie and veteran GMs out there who are interested in managing their campaigns better. Walt and Phil, let me raise my hat to you! Great job! Great book!

Odyssey will be available for preorder from the official Engine Publishing site starting today! I want to thank Martin Ralya again for providing me with a preview copy of this fine book.