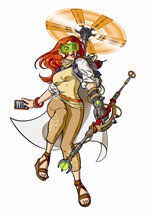 For the last couple of days I have been thinking a lot about Fate Accelerated Edition. Fate has always been a game I was quite excited about, but it’s definitely not what you would call rules-light. Most versions of Fate are actually pretty complex. Having to wrap your head around the rules, applying Aspects, Skills and Stunts properly can be a daunting task – especially for players and GMs unfamiliar with the rules.

Fate Accelerated looks a lot like it could be what I have been waiting for. It’s a streamlined version of Fate Core and is not much more complex than games like PDQ or even Risus. Skills are replaced by Approaches which makes it much easier to adapt the game to every setting imaginable. Overall the number of Aspects and Stunts a player character has, have been reduced, which makes creating a character easier and faster.

Fate Accelerated has no special rules for magic, equipment etc., so an attack with a gun works the same as an attack using a magic spell or using martial arts. Equipment usually doesn’t play a role at all, aside from gear you mention in your character’s Stunts or Aspects. I have to admit this is something I still have to get used to, but it sounds as if it could make things so much easier!

Thinking about Fate Accelerated and pondering what to do with it, is a lot of fun, but in the long run it’s not enough. Games are there to be played, not just read. Luckily I know at least two players who are very interested in Fate and would love to play in a game run by me. I fear scheduling a game might be an issue, but that doesn’t keep me from making plans.

The question remains what kind of campaign to run. Recently my interest in Shadowrun has increased slightly, probably because of the upcoming Shadowrun Returns computer game. Back in the 90s I ran Shadowrun regularly, but nowadays I can’t fathom how I could stand the rules back then. I guess I am just getting old. Even though I am not too fond of Shadowrun’s rules, I love the setting, especially the early 2050s era. It may feel a bit anachronistic in this day and age, but it has a certain “old-school” cyberpunk feel, I like. I am pretty sure that FAE can be used to run a Shadowrun game, if you focus on characters and story. Special gear, magic, etc. can easily be handled using appropriate Aspects and Stunts.

Alternatively I am also considering a more classic cyberpunk setting. Not everyone wants Elves and magic in their dystopian future. I think I mentioned before that I would love to use the setting from Deus Ex Human Revolution for a tabletop RPG. But I guess before making a final decision I’ll have to talk to my players first. But that doesn’t keep me from throwing a few ideas around. 😉

What I love about Fate Accelerated is that it’s so easy to apply the rules to basically any setting you can come up with – provided you are comfortable with the narrative play style Fate supports. So what are your plans with FAE? Do you want to run a game with it or is it not crunchy enough for your tastes? Please share your thoughts below.