Last week I posted about three upcoming games I’m excited about. Today I want to add a couple more to that list. 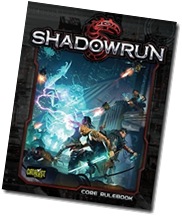 Number one on my list is Shadowrun 5th Edition. Yes, you read right. After many years of abstinence from Shadowrun I am excited about this fantasy-meets-cyberpunk RPG again. Shadowrun 1st Edition was among the first roleplaying games I bought and I ran this game for many years.

I think it was around the time the third edition was released when I lost interest in Shadowrun and focused on other games. Over the years I also moved away from rules-heavy games to mainly rules-light games. From what I’ve read so far, SR5 is much more streamlined than older editions and if the core rulebook looks as good as the quickstart PDF, we’re in for a treat!

The next game on my list is from Cubicle 7 as well. Rocket Age is an alternate history retro sci-fi roleplaying game using the Vortex System which powers Cubicle 7’s Doctor Who and Primeval games. Check out the awesome trailer they’ve created:

Hopefully we won’t have to wait too long for more details on the game. According to the announcement on the Cubicle 7 website, the game will feature radium-powered rockets, thunder lizards on Venus, ray gun wielding heroes, martians, and more cool stuff. What’s not to love?

I’ve got Genesys on my mind