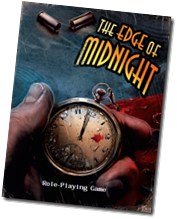 The first character I ever played in a roleplaying game – I was playing TORG at a con in ‘92 – was a hard-boiled detective from the Nile Empire. I love watching movies based on the stories by Chandler and Hammett and one of the first roleplaying games I’ve written was called Thrilling Noir Stories. So I guess it would be fair to call me a fan of the Noir genre. It’s no surprise that I eventually stumbled upon Edge Of Midnight, Rob Vaux’ fantasy/noir roleplaying game.

Edge of Midnight is a very beautiful 225-paged book with a black & white interior. The interior artwork and layout fit the genre perfectly and give you a good impression of the “feel” of the game. The PDF files kindly provided by the author Rob Vaux for the purpose of this review had some minor font issues, but I guess this was just a problem with the particular PDF and not the product itself. I’m definitely tempted to get a hardcover version of the game.

Now let’s have a look at the setting. The world of Edge of Midnight is not unlike our own in the late 1940s. The most powerful and influential nation of the world is the Unified Commonwealth, which is at the same time a brighter and darker version of the United States of America. A couple of years ago the world waged war against a group called the Order of Nu. This order introduced magic to the world which sparked a world-wide conflict. Magic-use was wide-spread and caused the rise of Gaunts, transformed humans with inhuman strength and speed, but who also leech energy from anyone around them. Magic is now a reality in the Unified Commonwealth but highly restricted. Aside from a few state-employed or licensed Warlock use of magic is banned. That doesn’t keep criminals and other low-life from employing magic to commit their crimes. Oh, there’s one more thing: for some reason nobody can clearly remember anything that happened during the war or before that. History is all but lost to humanity.

The book provides a lot of background information for players and GMs. There are whole sections that deal with daily life in the Unified Commonwealth, Warlocks, Gaunts, how to integrate Warlocks and Gaunts into a party of players and more. While the world of Edge Of Midnight is close enough to our world in the ‘40s to feel familiar, there are enough differences to set it apart. There’s more to the world than just gaunts and magic. In my opinion the book does a great job of both conveying the atmosphere and facts of the world to its readers.

One of the aspects of Edge of Midnight I really love are the mechanics. When making a skill check you roll two d10 and add the skill to the one die and the relevant attribute to the other die. The total of the both die results plus the skill and attribute values are then compared to a target number. If the total was higher or equal than the TN the skill check succeeded. If the total was high enough but either the skill die’s total or the attribute die’s total came too short, you only managed a partial success. Depending on which die total was too low (or both) the GM decides an appropriate outcome. I always like dice mechanics that allow partial successes but I have rarely seen anything as elegant as this one.

For character creation the game uses a point-buy system. Each player gets a certain amount of points that they can distribute between skills and attributes respectively. After that you choose a background from a list (which includes everything from acrobatic to wise). Last but not least you pick one of the available professions. Between backgrounds and profession are more than enough combinations to allow for basically every concept you can come up with. 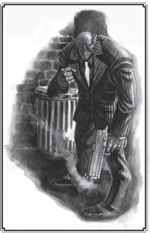 Overall the rules feel pretty light to me – which is a good thing. For example the rules for combat and damage are only about 10 pages and these pages include an extensive example of play. I haven’t run or played Edge Of Midnight yet, but I am pretty sure that in actual play characters and stories are in the limelight while the rules gently move into the background.

Oh, wait, I haven’t written about magic in Edge of Midnight yet. In Edge of Midnight magic effects are described by scientific terms like Electricity or Thermal Energy.  The magic system itself is pretty freeform. There are no set spells but each skill rank in one of the Scientific (Magical) Skills grants you certain abilities. Electricity level 1 allows the caster to short out a fuse, power a flashlight or scorch paper etc. Gravity level 9 allows the character to move up to 2000 lbs with his or her will, rip up city street or crush metal objects. In a way this magic system reminds me of the one in “Mage: The Ascension” but luckily it’s much simpler to use. The downside of magic in Edge of Midnight is it addicting effect. Magic use comes with a unique rush – much like a drug high – but after it fades the warlock feels drained and eager for more. This effect of magic fits perfectly into the noir genre and helps to limit the powerful effects of magic effectively.

Overall Edge Of Midnight is a very enjoyable read and probably even more fun to run and play – especially if you’re a fan of the noir genre. If you are not comfortable with magic in your detective stories, you could probably easily ignore gaunts and warlocks, the game should definitely work as well. But in my opinion the setting is one of the highlights of the game – aside from the elegant skill mechanics. While it is familiar enough to allow players to easily immerse into the game, it also offers a lot of unique elements and an underlying mystery. Alas Edge Of Midnight is not very well known. The fact that the official website has been down for ages doesn’t help and the lack of a PDF copy at RPGNow or DriveThruRPG is unfortunate. The complete Edge Of Midnight line is available in print and PDF from Studio2Publishing though.

This review is based on a PDF version kindly provided by Edge Of Midnight’s author Rob Vaux. I also want to thank Marshall Smith who helped me to get in touch with Rob in the first place!