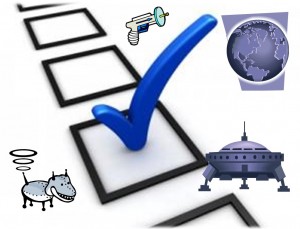 Keeping with the theme of Michael’s last post about campaign design, I would like to share a little something I created for my upcoming sci-fi game. As I’m ramping up for my the much posted about science fiction game, Wanderers of the Outlands (click on that link to read the background) I’ve created a questionnaire to get some feedback from my players about their likes and expectations.

I’ve written about questionnaires before, specifically the questionnaire for my supers game. I know my players make fun of my handouts (and my Power Points), but they have proven invaluable when preparing campaigns and creating adventures. So without further ado, here is a Sample Sci-Fi Questionnaire. You can also click here to get the file in WORD format.

I hope you  like it and find it useful! Looking forward to you feedback.

Come to me my jungle friends!