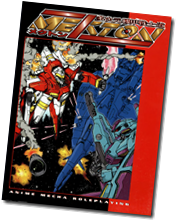 For some reason I’m in the mood for some more Mecha in my gaming life. Back in the early ‘90s we played Battletech almost weekly and I have some fond memories of a short-lived Mechwarrior campaign. But after that I haven’t played that many Mecha RPGs or tabletop games anymore. We planned to play Heavy Gear, Robotech and Jovian Chronicles but none of the campaigns really got into gear. And now – out of a sudden – my mind is on Mecha gaming again. Things started with a renewed interest in Battletech, the game that helped to turn me into the gamer I am today. But while I have fond memories of the game, I also remember the issues I had with it. Restricting the available mech designs to the 3025 era helps a lot, since I am not too fond of the Clans, but still something still irks me about the game. And aside from the first two editions, the Mechwarrior RPG has always been way too crunchy for my tastes.

So I started looking into alternatives. I love the Heavy Gear setting, but the miniatures are pretty expensive and I’m not sure if I want to invest into another miniatures game at this point. I may look into the RPG side of Heavy Gear again, but at the moment I found another interesting alternative.

Mekton Zeta is quite old, but it looks like it could scratch my Mecha itch. Getting a print copy is almost impossible here in Germany, but luckily there’s a PDF copy on DriveThruRPG. The PDF was created from a scan of the printed book and it shows, but the quality is ok. The rules look simple enough, only Mecha creation is a bit more tricky. Instead of being tailored for a particular setting, Mekton Zeta can easily be used for all kinds of Mecha settings. Heck, you could even use the Mecha creation systems to build fantasy creatures. The roleplaying game has a strong focus on anime drama and a character’s backstory and relations to NPCs and other PCs play a vital role. There’s a lifepath system that helps you to come up with a cool backstory.

Yes, the game is quite old and both the layout and artwork are not up to snuff with today’s standards, but it’s still a very cool game, that you really should check out if you’re into Mecha anime-style action. I’m not sure if you can use the Mecha combat rules for a Battletech-like tactical game as well, but with some tinkering it might be possible. By the way, there will even be a new edition which has been funded through Kickstarter recently.