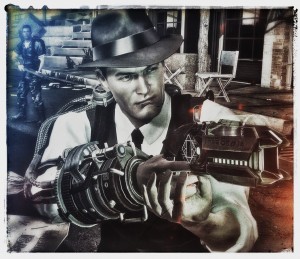 As I mentioned before I haven’t run any roleplaying games in a while. Several plans haven’t come to fruition and over the last weeks I got more and more frustrated. One advice I got by several people is that instead of trying to run an epic campaign, I should start with easier fare to slowly ease into the GM job again. Why not run a couple of one-shots or an episodic campaign instead of one with an over-arching epic story? But as usual I couldn’t make up my mind what kind of one-shot or short, episodic campaign I’d love to run. I tried to make up my mind on my own this time. Normally asking the players for input is a great idea, BUT my evil brain has the tendency to make me agree to running games I later feel overwhelmed with.

For a while I was throwing several ideas around, until I stumbled upon the obvious. For the last weeks I have been (re)watching the X-Files, a couple of UFO conspiracy “documentaries”,and Dark Skies.  I also played the computer game “The Bureau: XCOM Declassified“. So why not run a game inspired by those sources? The players could be members of a secret organisation fighting an Alien invasion and hiding the truth from the population. Very much like in the computer game, the players are sent out in small teams on missions to fight the alien threat, recover crashed alien craft, investigate strange events, et cetera. As a setting I am currently favoring an early 1960s USA, which is also the setting of both The Bureau and Dark Skies, which makes it easier to draw inspiration from these sources. And much like in TV series like X-Files I can easily throw in a Monster-Of-The-Week episode which can be easily improvised if I don’t have any better ideas.

As a system I am almost 100% settled on Fudge. There are two reasons for that: a) Fudge is just awesome and I want to put all these Fudge/Fate dice I bought to good use, and b) I recently rediscovered Micro Fudge, which is a perfect way to play Fudge if you want to focus on playing without having to worry about all the options Fudge offers. Fudge also assumes competent characters (which fits my game idea perfectly) and combat should be fast and quite deadly (which is also a great fit). Last but not least, Fudge can be tweaked to my hearts’ content, which is always a plus in my book.

The only thing I have to come up with now is an introductory adventure and perhaps a few cool handouts to set the mood of the game. Perhaps a custom character sheet made to look like some official government document may help as well. Luckily eyeballing NPC stats in Fudge is extremely easy, so I can create enemies etc. on the fly, when needed, so I can focus on the story during prep.

What do you think of my idea? Please share your thoughts below!

The Tale of Lancaster’s Folly