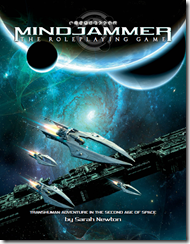 Some of you might be a bit confused right now. Wasn’t Mindjammer a novel? And what about that Starblazer Adventures setting from 2009? Mindjammer – The Roleplaying Game is basically the stand-alone 2nd edition of the 2009 game set into the same universe as the novel. Instead of Starblazer Adventures it now uses Fate Core as its basis but this time around the complete rules are included.

I initially planned to write a full in-depth review of Mindjammer, but then decided to give it the first look treatment. Why? Mindjammer is a tome of a game. For this first look Sarah provided me with the Thoughcast Edition PDF (which is what the preorderers get) which has 502 pages. The new layout and artwork is great and fits the transhumanist setting much better than the look of the 2009 book. The artwork from the British Starblazer comics has been replaced by artwork created specifically for Mindjammer.

So what is Mindjammer all about? Let me quote from my review of the novel:

Humanity has reached the stars millenia ago and the New Commonality of Worlds has united almost all humans. Ultra-advanced technology is commonplace. Intelligent spaceship called Mindjammers roam the stars, humanity is connected by some kind of “thought internet” called the Mindspace.

Sending thoughts to another persons is as easy – even easier – as sending an email today. Thanograms, the sum of the skills, knowledge and memories of a dead person, cast into the Mindscape at the moment of death, can be used as the controlling intelligence of synthetic beings called eidolons, spaceships and even personal equipment. But that doesn’t mean that immortality can be achieved. The belief that an eidolon is actually the dead person is called Transmigration Heresy and is often encountered in colonies that have recently been reintegrated into the Commonality. 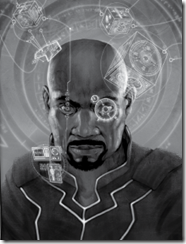 So basically it’s transhumanist space opera with a twist. Usually in transhumanist settings transfer of personalities is a common theme and the transferred mind is still considered to be the person it was before. This is different in Mindjammer and it makes the game much more playable in my opinion. The setting is definitely what makes the game a must-have for SF fans. It’s unique, extremely detailed, and should be a lot of fun to play, IF you find players willing to invest some time and effort into it. Mindjammer is definitely not a pick up and play kind of setting. If you plan to play in a Mindjammer campaign you should read the background sections of the book throughly or at least read Sarah’s novel. Alas not every player is willing to put so much effort into a game.

The rules of Mindjammer are based on Fate Core which is the best version of Fate so far. Having the core rules included in the game is a mixed bag if you ask me. It’s great if you don’t own the Fate Core rule book, because you can just pick up Mindjammer and you’re done. But if you already own Fate Core, a setting-only book might have been the cheaper choice. And you never know what rules might be different in Mindjammer from Fate Core. But from what I’ve read so far, Sarah made no changes to the core rules, but just added a couple of subsystems using the Fate fractal like rules for organisations or spaceships.

So who would I recommend Mindjammer to? I’d recommend the game to everyone who’s interested in space opera with transhumanist themes woven in who is willing to invest some effort. You might also use Mindjammer as a coal mine if you intend to run your own SF setting using Fate Core, but it would really be a shame if you didn’t use the excellent Mindjammer universe. The New Commonality of Worlds  is definitely an exciting place to play in.

Mindjammer is currently available for preorder from the Modiphius online shop for $54.99 which includes the hardcover version and the PDF. If you preorder you get the Thoughtcast edition of the PDF at once. The hardcover book ships later in March. Then you’ll also get the final PDF.

By the way, if you have any questions regarding Mindjammer, feel free to post them in the comments below. Sarah Newton has agreed to answer a few questions for us later this week and I am sure I can include a couple of questions by our readers in the interview.