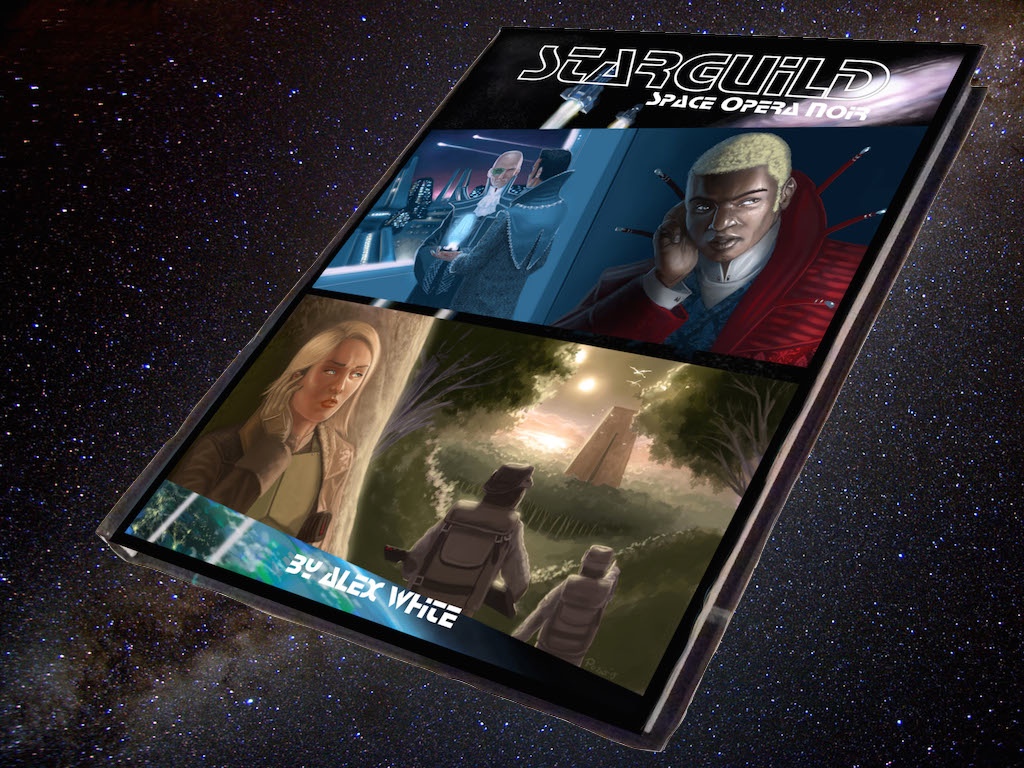 Let me start by giving a shout-out to author Alex White for providing me with a preview copy of his roleplaying game Starguild. I had it on my harddrive for a while when he announced the Kickstarter project but alas I haven’t had the opportunity to give it a proper read. But from what I’ve seen so far, it looks pretty sweet.

Alex calls his game a Space Opera Noir RPG, which – at least in my opinion – goes together like peanut butter and jam. It’s a perfect combination! As influences he lists movies like the Star Wars series, TV shows like Babylon 5 and Firefly, as well as Lovecraft’s Cthulhu Mythos. All this combined with the tropes of the noir genre sounds like a match made in heaven. The 240-paged preview PDF contains all the rules needed to play the game, enough background material for countless campaigns and an extensive section on NPCs, encounters etc.

What sets Spaceguild further apart from other games on Kickstarter is the fact that the book is basically done and has been playtested for about six years. The rules are what I would consider rules medium. They look easy enough to grasp, especially because there are some similarities to the d20 System. As I said before I haven’t read the rules thoroughly yet, but what I’ve seen looks pretty promising. The only thing missing from the book is some professional artwork and that’s exactly why Alex is currently running the Kickstarter project. He already has contacted several artist, who will be providing artwork for the game. The rules and the layout are actually already done.

If you want to learn more about the game, the system it uses and the Kickstarter, I recommend checking out the Kickstarter page or this interesting review and interview at UK Roleplaying. The Kickstarter runs till February 25th and has already been fully funded. If you are interested in space opera roleplaying with noir undertones, you should give Starguild a chance. By the way, for just 10£ you get the final PDF after the Kickstarter has finished and the preview version as soon as you pledge. I guess this is a very fair deal.