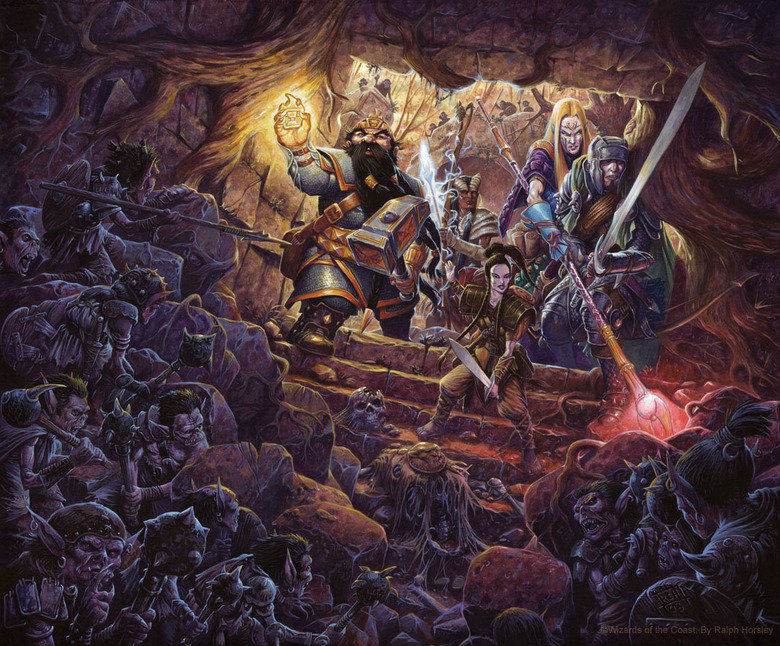 One thing I noticed while reading RPG rules (and even while writing them myself) is that combat rules often make up the majority of rules. Even in rules lite games, combat rules are usually more complex and deep than the rules needed for non-combat activities.

Even in games which are not focused on fighting monsters and taking their stuff, combat seems to be of vital importance. I don’t think I know a roleplaying game without any combat rules – although I am sure there do exist a few out there. Regarding the history of roleplaying games it’s no surprise that combat rules are so important. Everyone’s favorite fantasy RPG Dungeons & Dragons pretty much started out as an extension to a miniature combat game.

Some games – especially modern indie games – replace the rules focused on combat by conflict resolution rules which can be used for social conflicts as well. Having a game where combat is handled by a single dice roll are pretty rare. The whittling down of hitpoints by exchanging blows (or shots) is much more common.

Recently I noticed that this focus on combat starts to bother me. Combat often takes a lot of time and because of all the details involved a couple of combat turns can take hours of real time (Shadowrun is especially bad when it comes to this). Non-combat actions are usually handed by just one roll, but when the guns (or swords) are drawn, we switch into tactics mode. Is this really neccessary?

There’s also another problem. If your only tool is a hammer everything starts to look like a nail. In most roleplaying games the characters are no people I would like to spend time with. Often they are more likely to bash your head in than to start a pleasant conversation. Conflicts tend to be solved by violence because that’s what characters are usually optimized for.

I don’t know if this is really a problem that needs solving. I am just thinking out loud here. It’s just something I noticed. So, what is your thought on the matter? Do you think combat is a vital component of any RPG or do you know of any games where the emphasis is on non-violent solutions? What about games which solve conflicts with a single roll? Share your thoughts below!