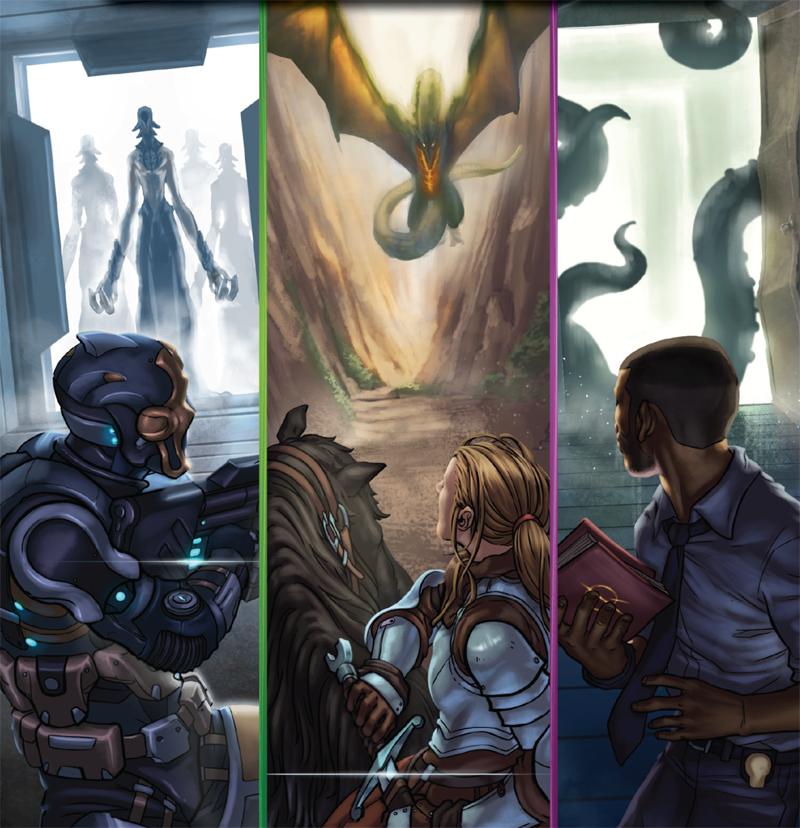 I love genre-agnostic roleplaying games. Mostly because they allow me to dream of using them for my homebrew settings (which of course get never finished). But they are also a great choice if you and your players want to play games in many genres but don’t like to learn new rules every time. Sure, there are systems like GURPS or HERO which are both complex and pretty exhaustive, but luckily there are also a slew of generic rulesets for people who prefer their rules a bit lighter.

A great example for a generic rules-light system is Eloy Lasanta’s Pip System. It actually began as a system intended to introduce young players to roleplaying, but I am sure older players and even veterans of our hobby will find a lot to love about it. 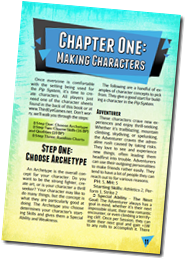 The basis for this first look was a complimentary PDF copy provided by Eloy himself. Thanks again! The 145-paged PDF has a simple but clean two-columned layout and a brightly-colored background. The interior artwork is a bit on the cartoony side which is no surprise given the system was initially meant for young players. A lot of the artwork used is stock art, but it’s of a pretty high quality and doesn’t look out of place.

At its core the Pip System is a classic dice pool system. Usually you roll white dice which represents the character’s abilities and black dice which stand for any opposition. Each die which comes up with a 4+ is a success, with successes on the black dice cancelling out the successes generated by the white dice. This is actually a pretty interesting way to handle difficulty, but also means that the number of dice you have to roll may become quite high very quickly. 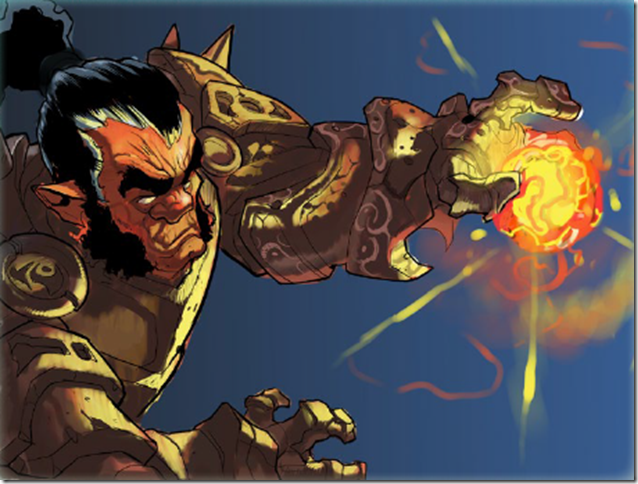 Character creation is quite easy and straightforward. You first pick a fitting archetype, then you may purchase skills and qualities, and last but not least you roll on a number of random charts to flesh out your character. The random charts determine what gear a character carriers, what they look like or what Contacts they have, their Past, their Future, et cetera. There are also customized tables for the various genres.

The Archetypes are quite varied and range from Adventurers, Brutes, and Hunters to Sleuth or Warriors. Each archetype provides the character with a set of starting skills, starting physical and mental health, a special ability and a hindrance. Depending on what you might want to play, you might find the list of archetypes lacking, but luckily creating your own archetypes is very easy and explained in detail in the GM section. 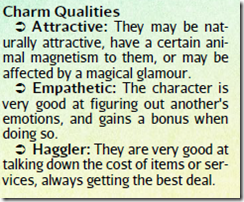 One nifty aspect of the Pip System are skill qualities. Each skill has a number of qualities attached to it, which grant your character additional abilities. Each rank in an ability also raises the number of dice added to the pool if you’re using this quality. For example if you have Charm at rank 3 and Haggler at rank 2, you can roll three dice for general Charm-related rolls, but 5 dice when haggling. The skill rank also acts as a cap to the related qualities. For example in order to buy a quality at rank 3 you need to have skill rank 3 or higher first. 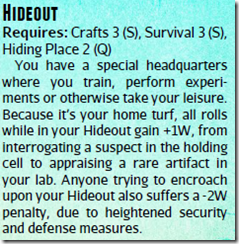 There are also Advanced Qualities which are a more like the special abilities granted by the archetypes instead of the skill qualities I mentioned above. Examples for Adv. Qualities are Backstab, Born Magical, Stunt-Pilot or Wealthy. In order to buy these qualities the character has to fulfill certain prerequistites.

But it doesn’t end here. There are also Gear Qualities which can be purchased to turn simple pieces of equipment into more special gear. The Gear section lists various qualities which can be applied to gear like Biological (If the armor is damaged, it regenerates and is useful again after one Round.) to Armor, or Stormforged (Inflicts the Burned Effect with 3+ successes on the attack.) to Melee Weapons. There are various examples for gear you can pick, but the system is definitely designed to allow you to create your own.

The actual rules of the game are about 20 pages long and contains everything from standard task resolution to combat. There are some nice special rules like Burst Dice (certain qualities allows you to reroll dice which resulted in a 6 may be rerolled with the potential of additional successes). Overall the rules should be pretty easy to pick up, especially if you have played other roleplaying games before, but I also assume that it should work great as well, if you’re a new player. 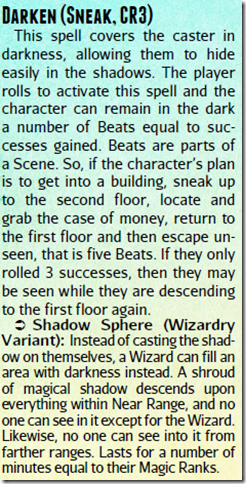 The Magic system in the Pip System Corebook again uses the Qualities system I’ve already mentioned. Basically spells, spell schools, etc. are just qualities purchased in conjunction with the Magic skill. There’s easy Magic, which only uses the skill itself, but more advanced spellcasters can get spellbooks as special gear, magic schools (which work like advanced qualities) and spells. Most spells are even tied to other skills as Magic, which is actually a pretty cool idea (but with the Magic skill still acting as the cap). So in order to raise the Darken spell to rank 3, you need a Magic skill of 3 or higher, even though the spell actually adds to the Sneak skill.

Of course the Pip System Corebook contains a bestiary which includes opponents for the various genres. In my opinion the list is a bit short, but given the relatively easy system, you can easily create your own. There’s also a quite helpful GM (which the game actually calls Game Guide) chapter, which explains the responsibilities, how to prepare a game, and gives other tips on how to run a game using the Pip System. While I think the majority of buyers will actually be roleplayers with at least a few games under their belt, the GM chapter should contain enough tips for new GMs to get a good grip on their job pretty quickly.

What really surprised me is that the system’s author also included a “Simplified Pip System”, which takes the already simple system and makes it even more simple. Yes, that’s possible. The Skills are replaced by the attributes Body, Mind, Charm, and Luck. Qualities are also more like specializations in that variant of the game. Instead of getting special abilities as well, simple qualities only grant additional ranks in certain situations. 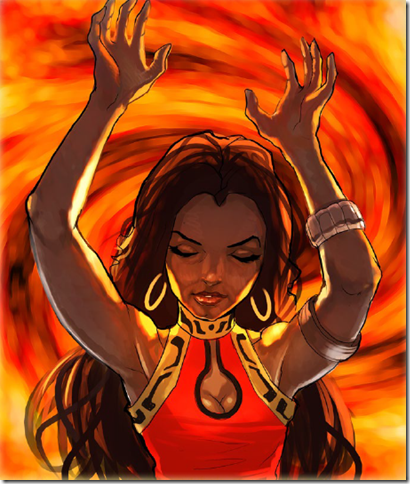 Last but not least Eloy included a couple of tips on how to run games with kids. Nothing groundbreaking to see here, but it’s a nice touch.

Overall the Pip System Corebook was a pleasant surprise. The system is as easy as advertised but the quality system allows to add more depth to every aspect of the game. I especially like the magic system, which allows Magic Schools, spellbooks, and spells, but also improvised one-use spells by the way of the Magic skill.
The Pip System is definitely an interesting choice if you’re looking for a rules-light system and I am really looking forward to whatever Eloy plans to do next with it.

The Pip System Corebook is currently available digitally for $14.99 or your regional equivalent. The POD version sets you back $24.99. Both the PDF and the POD softcover book are available through RPGNow.

Update: The game actually has rules for vehicles. I don’t know how I could have missed those. My bad. 🙁