I have been looking at the Eclipse Phase quick-start rules this week. This is a system after my own heart. It is d100 which is my spiritual home anyway, it is visually beautiful to look at and something that really appealed to me is that it breaks the rules of dice rolls.

Eclipse Phase is a d100 roll under system but unusually 00 is not 100 it is zero. 99 is then the worst possible result and an automatic critical failure.

These quickstart rules are an ideal primer. At just over 40 pages a quarter is about the setting and the premise of the game. One quarter is the game mechanics needed to play including how to resolve ‘tests’ such as skill rolls and the last half of the book is a starting adventure and pregen characters. 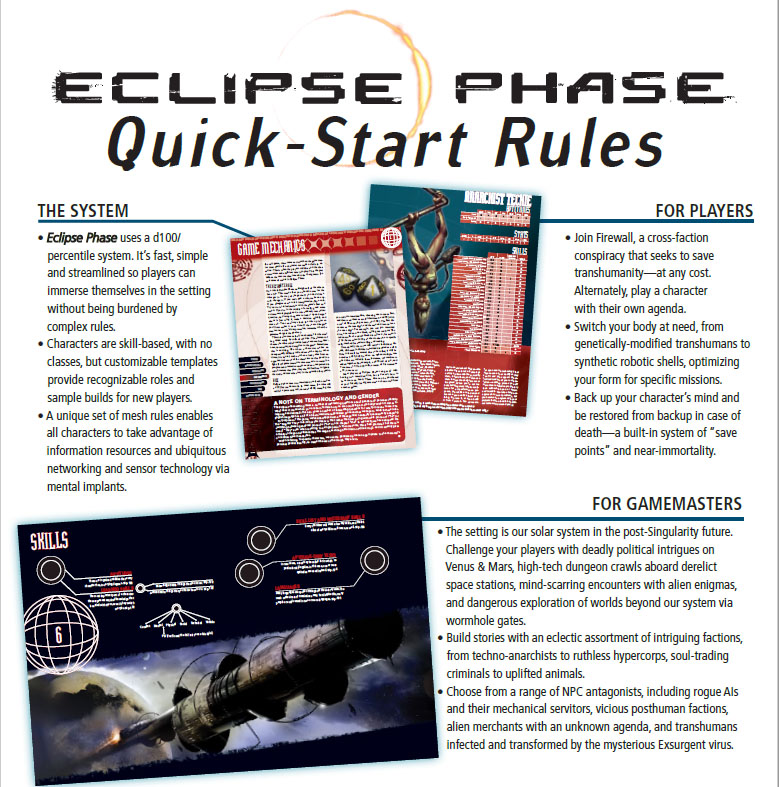 I don’t like games that are class and level based. I find classes restrictive and I don’t feel that the lumpy progression of levels reflects how people’s skills improve in real life. I appreciate that games are not real life but the only reason we have rules is to create a model of some fantastical setting and make it feel real.

Eclipse Phase is both leveless and classless, you see I told you it was after my own heart. In the game anyone can do anything, if you don’t have the actual skill you need then you can default down to the linked stat that governs the skill.

Another nice feature is that all characters are basically immortal. You can back up your characters personality and if the body dies then you download it to another body. You can even swap bodies to best fit the mission you are going on if you have the resources. This makes your physical stats largely arbitrary.  If you want to play a hulking terminator style character then you can put on a heavy weight morph (body) (or sleeve as the slang has it) and away you go. Next time you may want to play a different sort of character. The personality remains the same but the physical stats all change depending on the morph you are wearing.

As far as I can see there is little not to like about this game. In the eight years (2009) since the games initial release there have been 70 supporting products, some of them free and the paid for ones ranging from $0.99 to $19.99. These quick start rules are based upon version 1.4 of the core rules. I think the fact that the rules have remained largely unchanged for 8 years is a testament to how solid the original concept was.

If you want a Sci Fi one off this weekend then you could do a lot worse than this quick-start PDF.

What Am I Playing Right Now?