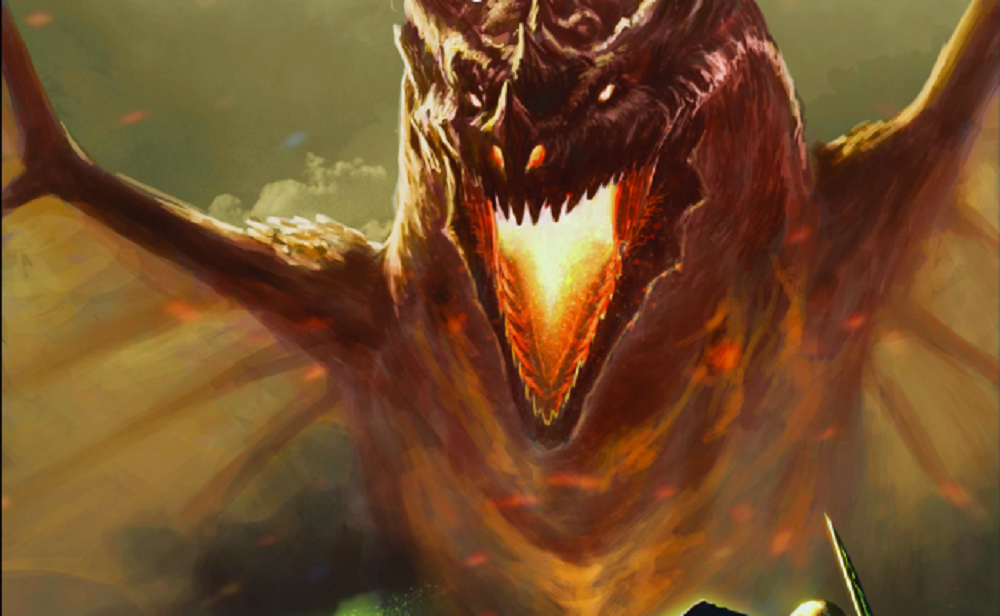 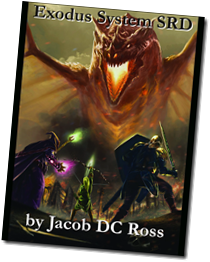 I am always on the lookout for new and exciting game systems, and so it’s not surprising that I eventually found out about Jacob Ross’ Exodus System. It was inspired by various games both modern and old-school ranging from Numenera and Cortex+ to ACKS and Black Hack. Jacob graciously provided me with a free copy of the Exodus System SRD which this review is based on.

The system reference document is 41 pages long, and has a simple one-column layout and no artwork. The system has been released under the OGL, so you can use it in your own works, or add stuff to it.

The Exodus System uses the familiar D&D attributes namely Charisma, Constitution, Dexterity, Intelligence, Strength and Wisdom. Each attribute is ranked using dice. The default for most attributes is d6, but one of the player’s choosing starts at d8. Over the course of a longer campaign attributes may be raised to d10, d12, and even d20.

Aside from the attributes each character is defined by their Party Role, which describe the character’s non-combat abilities, their Combat Role, and two Flavors which help to distinguish your character further.

Each Party Role not only defines the character’s Hit Dice, but also grants them special abilities. Let’s have a look at the Explorer Role as an example:

Explorer
The guide who helps everyone else get around in the wilderness.
HD: d8
Accustomed: Reduce by 1 the damage caused by environmental factors, such as heat or cold. The GM determines how much damage these effects normally do. Each time you take this power reduces the damage by 1 more.
Guide: You may add or subtract 1 from the Overland Travel roll. You can only take this ability once.
Self-Sufficient: Step up the standard Usage Die for your rations by 1. If you share your rations with people roll your Usage Die again, increasing the minimum number to step it down from 2 to 3, 3 to 4, etc. for each person with whom you share. Each additional time you take this ability reduces the penalty by 1.

Aside from the Explorer, there’s also the Face, Scholar, and Tough, which should basically cover the most common archetypes.

The Combat Roles define the damage a character causes, grants an armor dice, and adds combat abilities to the mix. The Combat Roles in the SRD are Controller, Damage, Healer, Sneak, and Tank. Characters get access to more abilities as they level up, but start with only one from both roles.

Unfortunately not every ability works well in every setting which goes a bit against the promise that the Exodus System can be used with every genre and setting. The Speed ability of Phase for example let’s you walk through walls. Don’t get me wrong, I love the creativity behind some of the abilities, but you might not be able to use them in all games. But if you don’t mind that your characters can perform the most wondrous feats, then it’s no big issue.

The Exodus System also uses Skills, but there’s no predefined skill list. You pick three things your character is supposed to be good at during character creation. Skills start at +1 but the bonuses can be improved by levelling up.

Apropos levelling up, there are no experience points to track. Characters level up when major goals have been reached. Each time you level up, you roll your Hit Die and add the result to your hitpoints total, you can also spend three skill points on existing or new skills. Every 3rd level you also can pick one ability from your flavors.

Task resolution is quite simple: choose a relevant attribute and skill. Roll the attribute dice and add in any modifiers. If the result is equal or higher than the difficulty level set by the GM you succeed. Unfortunately there are no examples on how to decide which DL is appropriate in certain situations.

In Combat things work a bit differently. Instead of just rolling one die you put together a pool of dice. If you attack you roll your Strength or Dexterity attribute die (depending on the weapon you use) and your damage die. The opponent then rolls their Action die and armor die to defend. If your roll exceeds the opponent’s roll you cause damage which is determined by your Damage die minus their armor die. That’s a nifty way of handling combat rolls. By the way, an enemy’s Action dice are determined by their Hit Dice. The damage they cause is also determined by their Hit Dice. If I understood the rules correctly you can also roll all four dice simultaneously if you use differently colored dice for example. This could also speed up combat quite a bit.

Another nifty idea is the Usage Die. Equipment which can be used up like rations, ammo, etc. have a Usage die. On every use you roll the die. If it comes up with a 1 or 2, the die steps down to the next lowest value. A d12 becomes a d10, a d10 a d8, and so on. If you roll a 1 or 2 on a d4 the item is depleted. This is definitely something I’ll one day steal for my games.

The SRD also contains an extensive list of items for various genres, vehicles, and also an Encounter Generator, Enemy Generator, and an Adventure Site Generator.

Overall the Exodus System contains a couple of cool ideas and it combines aspects from various systems I like. But it also has a couple of issues. There are times when I had to reread paragraphs several times before I understood what the author meant. The flavors are very creative and include very cool abilities, but don’t fit into every setting and genre. To be a truly generic system more “mundane” flavors are needed. But aside from that it’s an interesting system which just needs a bit more polish and perhaps a setting which let’s it shine.

You can get the Exodus System SRD at RPGNow for $4.99.