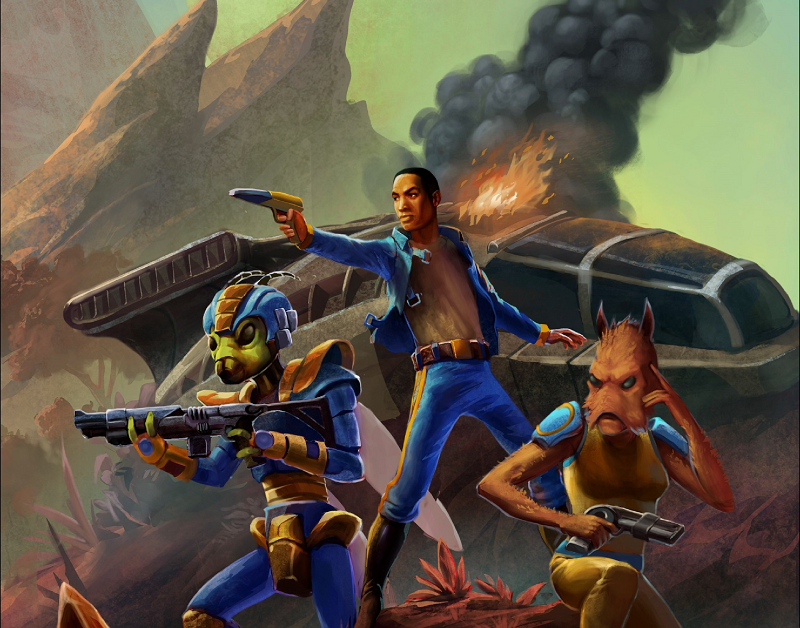 So the somewhat haughty and diminutive Rakhaadi ended up being snarky to most other species (Disadvantaged in social situations featuring aliens), good technicians (Advantaged with Hi-Tech) and somewhat physically weak (Str -10) and with a good probability of being psionic. There where additional aliens for flavour and a couple of semi-randomly rolled up worlds to set the stage.

I had expected to play this scenario with a couple of guys I meet there every year and who would be familiar with the way I run my game sessions. But every year there also will be a couple of new guests that wander around the camp site a bit lost until their friends show up who invited them in the first place.

So I was asked to run this session for them to spend the afternoon. Within 10 to 20 minutes after introductions I was able to break down the full range of setting and rules and got us running full throttle. And that’s where the game really shines – its accessibility: you combine the percentiles of the attributes with the percentile score of the relevant skill and roll under the resulting value. Modifiers come in increments of multiples of 5 – you can’t get more intuitive than that. The broadly defined skills or “roles” happened to inspire the players more to take action rather than checking their character sheets for appropriate skills. And then they started to get creative combining attributes with skills. Hilarity ensued…

Destiny points work as some sort of “Bennies” or “Karma points” for rerolls or saves. We barely used the moral code which I came to view as a more modular component. I also didn’t want to force personalities on the players. The descriptors turned out to be a rather ambivalent tool – one of the players decided to use it to create a more cartoonish character. She really annoyed one other guy with the trope of “probing humans” as Greys would apparently do. He on the other hand took his square-jawed, fearless Space Marine character too literally for my taste. But I suppose that was a bit my fault because I hadn’t figured out to which extent I wanted this element to dominate the session. We did not make use of the Benefit system which grants minor boons to more experienced PCs.

The game flows smoothly with its simple mechanisms and provides just enough of detail not to seem arbitrary. So our two “Greys” were sent to recruit “capable” humans to assist in the salvage and analysis of a wrecked, probably historic human starship. They disguised themselves as officials from another faction, the prestigious and mysterious “Custodians of the Passageways”. They did so to be able to land on a planet claimed by the aggressive and impulsive !K’adal (some sort of “reptilian Gorillas”) who dominate the stellar neighborhood.

The !K’adal made planetfall only minutes later to collect specimens for the next hunting extravaganza and they intended to pick up some humans because they are known for great “entertainment value”…

The humans had just completed a contract as mining engineers for a N’khanu business (the N’khanu are a species of six-limbed, radially symmetrical arthropoids) and were looking for a new job and/or for passage off of the planet. The threat of the !K’adal manhunt quickly brought the group together and they decided to leave the planet which resulted in a short chase and short space battle.

The rules for space combat are an extension of the personal combat rules with the most notable modification being the scaling of damage. These rules are not particularly realistic but FrontierSpace never claimed to be a Kerbal Space Program Combat Simulator. And they get the job done with a good chance of involving most of all of the player characters. The Referee’s Handbook adds more crunch to this but its largely optional. I tried to keep it simple though and I got the impression that the players enjoyed the images I tried to evoke (based on my memories of “recent” popular SciFi-shows like Battlestar Galactica or Firefly).

At last they got away and met with one of the leaders of the Scavengers, a Rakhaadi named Tholin who told them that they had discovered some large old starship of probable human origin. Tholin was especially intrigued by certain pieces of debris with characters on them he had never seen before. The human characters were not able to recognize the writing either. Hence Tholin’s salvage ship headed towards Forbidden Space where according to rumour still leftovers from the mysterious “Builders” can be encountered.
Some of those might be darn dangerous.

The rest was a run of the mill salvage operation – on a “historic” human refugee ark nobody knew existed here (although there was a struggling human colony nearby which might or might not be descended from this ship) and they were able to obtain valuable spare parts, an uncorrupted vintage datastore… and reactivated the reason for the starships wreckage which immediately “called home” and alerted one of those dangerous, ancient …things.

And since it was a teaser I stopped right there about four hours after setting off. FrontierSpace let us delve directly into the action, encouraged the players to take action and allowed me a very liberal play style. I really enjoyed this and since nobody left the gaming table I hope my players did so as well.

The following day I myself had the opportunity to play in a FS session. I had shown the rules to a friend of mine and within about 30 to 40 minutes we generated five characters and I had explained the basic rules to him. So we delved into “The Long Night” of the Traveller universe aboard some sort of nomad fleet which had escaped the destruction of their homeworld by a stray Brown Dwarf.
Our group had just recently earned the use of a scout ship and was assigned to a supply and exploration mission in a region of space which had been hit hard by the collapse of the Second Human Empire, the Rule of Man.

From the opposite site of the gaming table I got to experience firsthand what I described above – since I had a headstart concerning the rules I watched my fellow players explore the scenario rather than the rules.

And exploration it was: we encountered an abandoned starship of unknown origin. The investigation revealed that the crew had “fled” to the surface of the planet the ship was orbiting. Investigation of the campsite revealed that the remaining crew had peacefully lived their remaining livetimes on this planet due to a malfunction of the ships computer. The AI had developed some sort of “protection psychosis” and denied any access to crucial ships systems. So they shut it down and left.

We fixed said problem and salvaged the ship…only to find out that the AI had “infected” our computer early on, gained access to our star charts and then set off “caring” for our whole nomad fleet…forever.
There was little combat in this scenario but plenty to discover and investigate and again the term “intuitive” comes to mind: you want to analyze a life form? Roll INT + Scientist and apply any modifier due to your specialization. Checking for traps inside the derelict hut? Make a PER + Thief roll. Want to try to break the AIs encryption? Attempt an INT + Technician (Computers) check. The FrontierSpace Referee’s Handbook elaborates on these activities as you can read in Michael’s preview.

No complex math required, quick and comprehensive Frontier Space fits my preferred play style because it allows me to focus on the story not on the rules.

Helge is just an ordinary guy with a slightly obsessive dedication for Traveller in many of its variations.