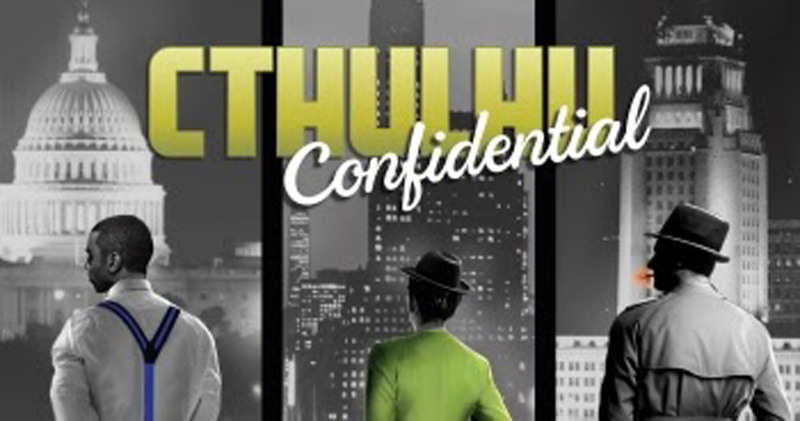 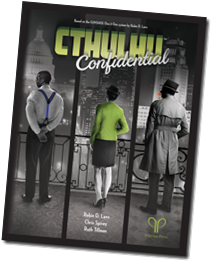 Cthulhu Confidential is the latest in the series of GUMSHOE roleplaying games by Pelgrane Press. It’s also the first game using the GUMSHOE One-2-One rules which have specifically be designed to faciliate roleplaying between just one player and one GM. Although I love the Gumshoe System in general, Cthulhu Confidential was a game I skipped because I didn’t think it was my cup of tea. Boy, was I wrong. 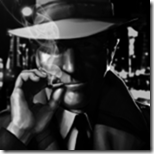 Before I get into more detail, what is Cthulhu Confidential all about? As mentioned before, it’s a roleplaying game for one player and one GM. As the name suggests it’s set into the world of H.P. Lovecraft’s Cthulhu Mythos and focuses on elaborate investigations. The core rulebook contains all the rules needed to play and three pregenerated characters with fitting adventures. The three protagonist in the book are Dex Raymond, a hardboiled detective from L.A., Sadie Cane, a reporter from New York, and last but not least Langston Wright, an african-american detective from Washington D.C. 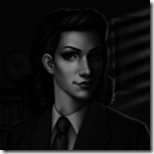 The system is a variant of the regular GUMSHOE system. Like the other games powered by the system characters have investigative and general skills. In Cthulhu Confidential investigative abilities don’t have ranks and the protagonist only has a subset of all available abilities. To compensate for that each protagonist has a number of allies they can rely on if special expertise is  needed. General skills are ranked in dice. Usually you start by rolling one die. If the skill fails, or if you want to reach a higher margin of success, you may roll an additional die if available. You can also voluntarily suffer drawbacks in the future, to buy another die. If you fail, or if you succeeded with a high enough margin, you get special cards with drawbacks (called Problems)  or advantages (called Edges) respectively. (Please note that I don’t own a copy of the rules, and I describe the mechanics from memory. So please don’t lynch me for getting things wrong. Thanks!) These cards are specially designed for each adventure and protagonist and add a lot to the flavor. What I especially enjoyed was the fact that combat was handled with just one roll as well. Depending on the outcome you get – you probably guessed it – another card. By the way, you don’t die during the adventure, but if your Problem cards outnumber the Edges, this might spell doom for your character in between or after adventures.

Ok, I wanted to talk about my experience playing the game. Here it comes: A while ago I visited my friend Ralf and he offered to run the game for me. Since the prospect of playing a 1930’s hardboiled detective in L.A. sounded just great I agreed, even if I wasn’t sure if the One-2-One concept was for me. He quickly described the basics to me and we dove right in. The adventure he was running for me was called The Fathomless Deep. It started by a beautiful rich woman entering my character’s office (don’t just all detective stories begin like this?) and offering me a job. Her younger sister had been missing for two weeks and now suffered from severe catatonia. My job was to find out what happened to her. 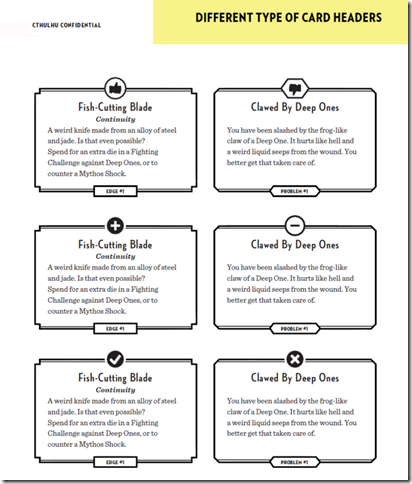 What I quickly found out was that Cthulhu Confidential is a very intense experience. Since you are the only player you can’t just lean back and let someone else take the limelight for a moment. You also can’t discuss your thoughts and ideas with the other players, because there aren’t any. This also means that the GM has their hands full as well. This is probably the reason why Cthulhu Confidential adventures are designed in such a way that they can be finished in just one session. But believe me, when I tell you, that it can be a fun ride, especially if you are into solving mysteries. At this point I am actually tempted to pick up the game at the next opportunity. My wife and I love roleplaying games and this might be the perfect game for the two of us!

Cthulhu Confidential is available in print and PDF formats from the official Pelgrane Press store (or local retailers) or as a PDF from RPGNow where it’s currently on sale for about $19 or your local equivalent.