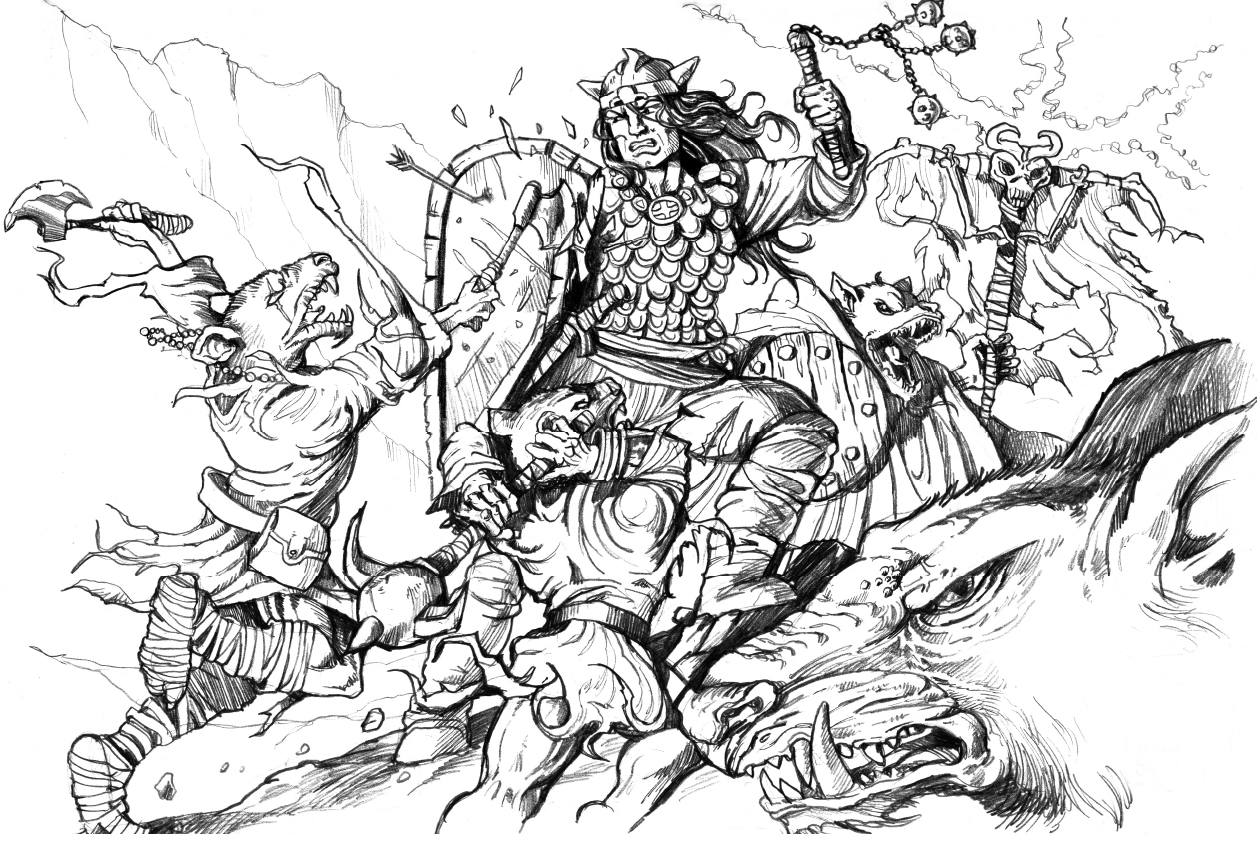 So this week I read the rules for Hack-n-Slash and they are pretty close to what I have been looking for. The deficiency is in the skills system primarily and the setting.

The latter is not an issue in any shape or form. Creating settings is a very personal experience and games seem to come in one of two varieties. The first is the setting is amazing and is the overriding driving force for playing the game. The second more generic rules and here is a vanilla setting you can tell any story in. D&D 5e plus The Forgotten Realms is an example of the latter and I would have said that Mutant Year Zero is a great example of the former.

The world of Hack-n-Slash is definitely the bland and generic variety than any GM can put their stamp on.

There are a few bits of Hack-n-Slash that I wasn’t keen on. The first was the preference for the adjective scales, mediocre, fair, good etc.. I am much more comfortable with target numbers. With Fudge both can be used interchangeably so that is not an issue.

The second change I would make is the skill system. I think it is my Rolemaster background but I want a little bit more granularity in the skill system. Fudge will allow me to do this as well so there is no barrier there.

Finally, and this relates back to the setting, I find the magic system is trying to be too much like the D&D spells chapter. I think fantasy RPG magic is an extension of the setting and cannot be separated from it.

I will offer up the 7th Sea magic system as probably the best magic system I have read in the past 10 years. It is far from perfect I am sure but it is just so perfect for the game setting. Each magical tradition, I am sure, is balanced against each other but each is treated as a complete individual and whatever rules and mechanics it needs to make it work are just applied to it.  Vision first implementation second. That is why Hack-n-Slash’s magic system feels flat, it wasn’t the designers vision.

SenileLarry and I have been emailing recently and he pointed something out to me. No Fudge fantasy games have been particularly successful. Those that exist are typically a single core book and then little or no support. Hack-n-Slash was the exception to his rule but he is basically right.

Even Digital Alchemy, the publishers of Hack-n-Slash are defunct, their website hasn’t been updated since 2012.

I think to some extent the problem is self fulfilling. The games do not sell well so there is no impetus to create more books for a game that doesn’t have a following. In a game designers group I am a member of it is generally accepted that most games on OneBookShelf will sell less than 100 copies. If you had pinned your hopes on building a platinum selling blockbuster game and then making your fortune writing and selling supplements and adventure modules then there is a very good chance that you will get the wind knocked out of your sails pretty quickly. The Fudge system itself is over 20 years old so if you use FUDGE as a badge of honour then it lacks a sense of being innovative. Ghost Ops didn’t mention its Fudge heritage at all. For me right now Ghost Ops is my gold standard of Fudge implementations.

I think right now the single most important selling point for a game has to be its setting. There is no market for a generic ‘fantasy’ game as we all have shelves full of those already. On the other hand Tales from the Loop is a platinum best seller and I think rode to success on the coat tales of Stranger Things. It is all about the setting.

So for me, I think I know where I need to go for my perfect Fudge fantasy game. It is to start at H&S and rework the magic and skills and fiddle with the character sheet. Nothing major there. The magic needs a setting and that is something that can only come from me.

While I am tinkering I think I would build in the Princess Bride wounds recording as I think that had the edge over the default H&S version but that really is tinkering.

Almost everything I create I release under a free license. In the past it has always been OGL. If I build this then I think I will release it. That would then mean to prove my point I would really need a great setting that captured the mass imagination. Now that has to be the challenge!

P.S. I mentioned Stranger Things in this post. Have any readers watched Dark on Netflix? Is it any good? What are your thoughts?