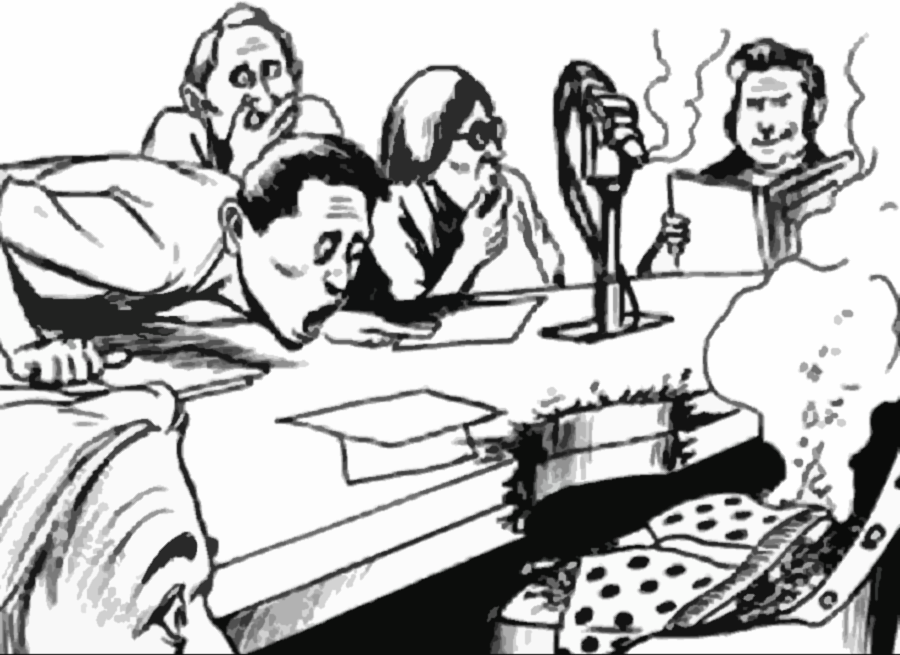 Ok, I am probably not that bad, but sometimes I feel that way. I’ve run games that were terribly boring, extremely formulaic, and I made every mistake at least twice. I remember game sessions were I actively tried to piss off my players, there were times I railroaded adventures that hard you could almost smell the smoke from a steam engine. I have been a bad game master many, many times.

In some cases I was bad because of lack of experience, but more often because of fear: the fear of getting the rules wrong, the fear of being boring, the fear of not entertaining my players, the fear of making a fool of myself. In my case fear either leaves me so paralyzed that I can’t even bear the idea to actually run a game, or it leads me to drop all of my good ideas and replace it with formulaic crap. I have asked players for dice rolls just in order to stall time. At times I was terrible.

Of course I also had brilliant games with NPCs my players remember to this day, where everyone was in the “flow”, where rolling the dice became less important, where everyone was fully immersed and the excitement was palpable. But over the years I feel things haven’t improved but rather got worse. I am probably too hard on myself. My friends keep asking me to run games for them. So it can’t be all bad. But as a GM I feel I could do better, and I am definitely suffering from serious burn-out.

In order to change things around I first need to find out what I really want. I want games where my players have more freedom, where drama is more important than combat, where it’s not about rolling the dice all the time. I want players to be fully immersed in the game. A game, where their decisions really matter, where there are dire consequences. I want a roleplaying experience that doesn’t feel like you just played another computer games but with pen & paper.

The game that recently came pretty close to that ideal is the Mutant Year Zero campaign my friend Matthias runs. In this game I had some extremely intense experiences and there were a couple of totally epic situations. And not because someone rolled high in a combat roll, but because of player-NPC interactions. I still remember the talk my character had with his arch-enemy in the middle of the night because said enemy thought my character was the closest she had to a friend. She asked for advice and it was a real struggle between taking advantage of this situation or to be the friend she needed in the situation right now. I am pretty sure I was literally shaking and my heart pounded in my chest. It was awesome.

I also enjoy the discussions we have around the game table about which direction our Ark (the place where the Mutants in MY0 live) should take. Which projects to tackle next, which alliance to form, which fights to begin – or to end. And we’re not always on the same page. Usually in-game conflicts are avoided, but in MY0 it’s what helps to drive the story. The game’s sandbox structure definitely helps to support player freedom. It’s lethality and the fact that the mutants are slowly dying out if they don’t find a way to treat their infertility puts constant pressure on the player characters. The game also has a mechanic to generate random threats for the Ark. The result is drama galore. It’s a wholly different experience to – let’s say – adventurers stomping through a dungeon, killing monsters and taking their stuff.

Unfortunately not every game is like this. More often than not, you just don’t feel that invested in the characters. My friend also ran a Shadowrun campaign. In that campaign he used commercial adventures that unfortunately were pretty bad. They made too many assumptions about the characters and their motivations. In general they were futuristic dungeon romps, while the Shadowrunners were just mercenaries. We got a lot of fun out of planning the runs though. Sometimes we even managed to get some drama going by letting our characters’ morality clash with what we were supposed to do. And there were definitely a few hard decisions to make that actually had consequences but not because of the adventures but because of our GM, who I can’t praise enough here.

Of course it’s hard to compare the games I run with games I’ve played in. Perhaps my players feel about some of my games as strongly as I feel about that MY0 campaign. I also think that my depression and anxiety issues play a large role in my perspective on my skills as a GM. Often I just feel I suck. Period. And in those cases not even facts can convince me that I am not a bumbling idiot who is boring his players out of their minds.

One thing I realized over the years is that things work much better if I don’t have to struggle with the rules. The simpler a game is the better. Especially Numenera worked like a charm. Coming up with stats for a NPC you just made up is as easy as picking a number (there’s really not much more to it). You also don’t roll any dice. All die rolls are done by the players so there’s not even the temptation of fudging the dice. I have to admit that I’ve done so in the past in order to make things easier for the players, but I eventually realized that failing is part of the fun. Heck, often failing is more exciting than succeeding.

When it comes to playing games I don’t mind something a bit more crunchy. Shadowrun 3rd Edition is way out of my comfort zone as a GM but as a player it was fine. But as a GM I was totally overwhelmed by something as easy as D&D 5th Edition. But to be fair, a main problem I had stemmed from the fact that a lot of this games’ mechanics look a lot like 3rd Edition but are in fact quite different. I am a bit enamored with FFG’s Genesys at the moment, but I am not sure if it’s the right thing to run at the moment. I am still not feeling confident running anything at all and Genesys is a game I have never run before, has definitely some level of crunch, and requires a lot of preparation by the GM (mostly because there are not many setting available for purchase right now).

I think I need to find some time to decide which system I feel most confident using, what kind of game I’d like to run, and then overcome my current block and do some serious prep work. I am pretty good at improvisation, but when I am not at the top of my game, my improv skills will not save me, if I am totally unprepared. Talking about these issues have helped me deal with them in the past, so expect to read more about my quest to become a better and more confident game master. Don’t be surprised if I throw out some ideas and plans in further posts. My mind is sometimes quite fickle and new input might change my perspective quite quickly. It has happened before, and it will happen again. I know that much.

I hope you found my ramblings at least somewhat interesting, but if you got that far, it probably wasn’t because you were bored to tears. If you have any advice, please share it in the comments below.