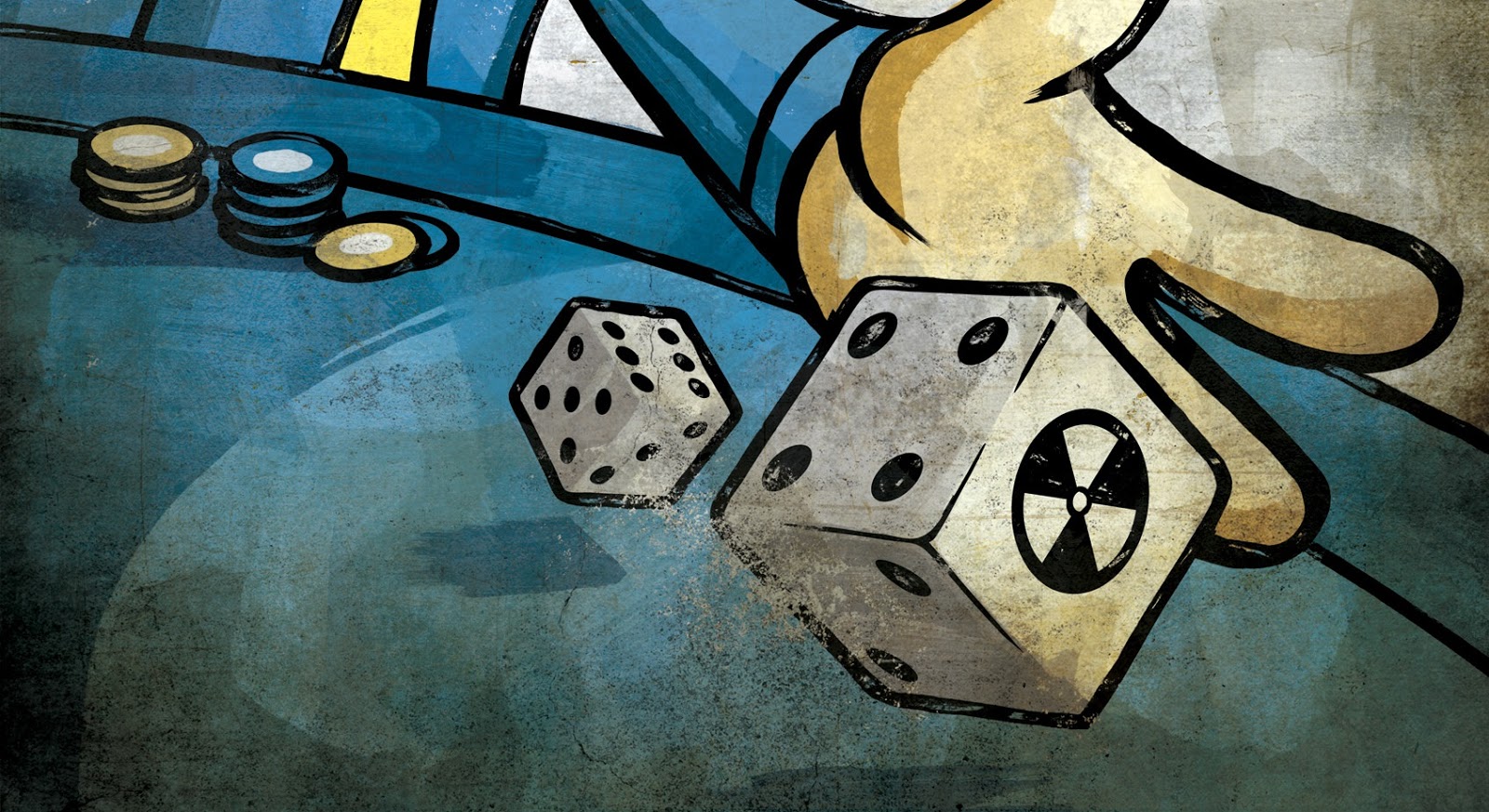 Later today Modiphius is going to launch the Fallout Wasteland Warfare RPG Expansion. A couple of days ago Modiphius graciously provided me with a copy, so I had the chance to give it a first look.

War Never Changes
I don’t think I need to introduce you to the Fallout universe. Especially after the huge success of Fallout 4 every geek worth their salt knows about the retro-futuristic and post-apocalyptic world. But if you have avoided video games all these years, here’s a quick primer: imagine a world culturally stuck in the 1950s, but with highly-advanced technology. Cars are powered by fusion reactors, there’s true artificial intelligence, robots, and powered armors. Even though fossil fuels and uranium became pretty much obsolete at some point, it is the fight over these resources that eventually starts a war between the US and China. This war ended abruptly with an exchange of nuclear weapons. In mere hours millions die, only a handful people survived in so-called Vaults. As the first people emerged from the vaults many years later they found a changed world filled with lawless bandits, mutated animals, radiated humans called ghouls and various factions fighting over the scraps left by society before the war.

The book gives an 16-paged overview of the setting in its second chapter, directly after the introduction. If you are a long-time fan of the series you’ll probably notice that not just the newer Bethesda games are covered, but factions and places from the two first games are mentioned as well. Unfortunately 16-pages are not enough to give you a good grasp of the setting if you haven’t played any of the video games before, but I guess the target audience of both the RPG and the miniature game are fans of the series.

What makes you S.P.E.C.I.A.L.?
Character creation in the Fallout Wasteland Warfare RPG is a pretty straight-forward affair. You pick one of the starting archetype cards, decide on a backstory for your character, pick 2 Gifts and 2 Scars and last but not least you get 5 experience points to spend on Perks, additional skills, etc.

If you have played the miniature game before you might feel right at home, but if you haven’t, expect to feel overwhelmed for a while. In order to save space and probably make translations of the cards easier, skills, movement ranges etc. are printed onto the card as colored icons. It took me a while until I understood what everything meant, or at least where I could look things up. The attributes used are the same as in the computer games: Strength, Perception, Endurance, Charisma, Intelligence, Agility and Luck. 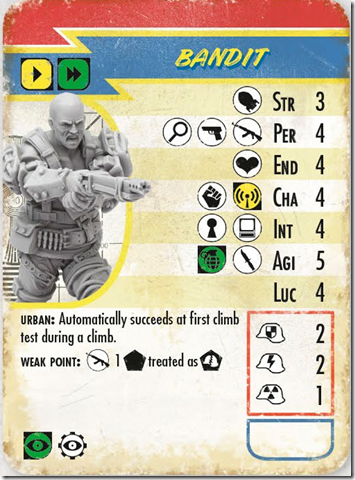 Even though every character is based on one of the 16 archetype cards available in the book, with the addition of Gifts and Scars (advantages and drawbacks), Expertise Skills, and Perks, you can customize your characters to your heart’s content. I was also positively surprised that Robots, Super Mutants, and Ghouls are valid character options.

Wacky Dice and Many Colors
The Fallout Wastelands Warfare game uses custom dice for task resolution. Skill dice are 20-sided dice with numbers and special symbols, while Effect dice are 12-sided dice with symbols and modifiers. When your character tries to achieve something which has a chance to fail (like attacking an enemy or hacking a terminal), a pool of these dice is rolled. The pool consists of one Skill die and one or more Effect dice (depending on skill used, circumstances, gear used etc.). To succeed the roll result has to be equal or lower the effective skill value of the character. I have to admit I haven’t been able to try out these mechanics during play yet, but they should work just fine – as soon as you get used to reading the dice. 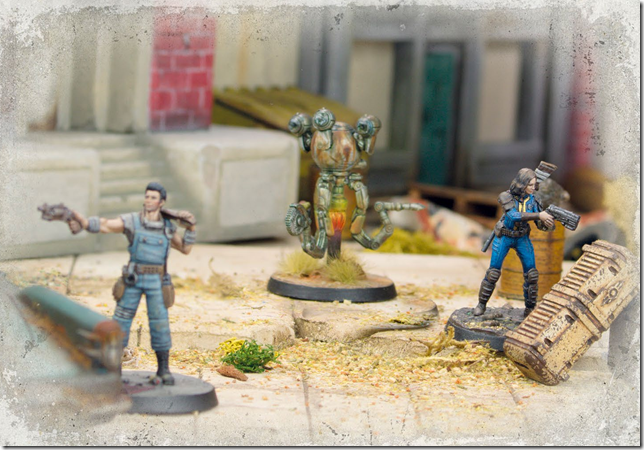 From what I’ve seen so far, the system – if you are at least a bit familiarized to it – allows for a surprising level of depth and generates interesting results while still being pretty quick. In a way it reminds me of FFG’s Genesys System which also uses custom dice for great effect.

The game also makes extensive use of color-coding when it comes to distances (like weapon ranges): orange is 6 feet, yellow is 12 feet etc. Luckily the designers have taken in account that color-blind people may have issues with this and included color blind markers to make things easier.

The combat rules are – unsurprising for a RPG based on a miniature game – pretty extensive and detailed. Since combat plays a huge role in the Fallout universe, this is only fitting.

The Overseer, Settlements, and more
The Fallout Wasteland Warfare RPG also includes an extensive GM section (who is called The Overseer here), which not only contains tips on how to run the game, but also on how settlements work in game. As in the Fallout 4 computer game players can build up a settlement to server as their base. The settlement system is not as in-depth as the one in Mutant: Year Zero, but it’s a nice touch and may help the Overseer to come up with plot hooks. The book concludes with a short introductory campaign called “Parzival and the Wasteland Knight”. Unfortunately I haven’t really checked it out yet. But I’ll probably follow up this “first look” with a couple more in-depth looks at the game at a later date.

A few words on artwork and layout
Overall I like the look of the game. The layout is a standard two-columned one, and the PDF version of the game comes with both textured backgrounds and a printer-friendly version. The artwork consists entirely either of photos of miniatures and terrain from the tabletop miniatures game or Vault Boy illustrations. While the photos are extremely well done, I would have preferred a different art style, but since the RPG is meant as an expansion (even though its stand-alone) to the miniature game, the use of miniature photos makes perfectly sense.

Conclusion
Overall the Fallout Wasteland Warfare RPG looks great. If you haven’t played the miniature game before, the dice mechanics may be an initial hurdle. My first impression is that the game does exactly what it set out to do: it allows fans of the Fallout series to experience exciting adventures in this post-apocalyptic world – with or without miniatures.

You can get the game later today from the official Modiphius store. The hardcover book will set you back €27.99, while the PDF edition costs €13.99. There’s also a bundle deal consisting of the hardcover rules book and a set of dice for €39.99.

Update: I just noticed that the PDF version is also available on DriveThruRPG.

(Almost) Back to the roots: Warhammer Fantasy Roleplay 2nd Edition