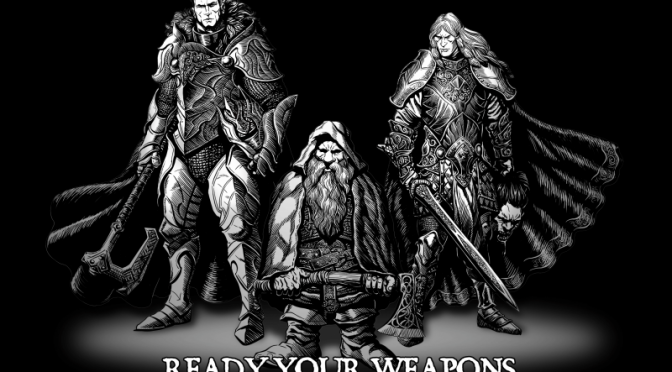 So I came across Against the Darkmaster this week and it peaked my interest. The game is, according to its website, vsdarkmaster.com a fan developed game derived from the original Iron Crown Enterprises MERP.

So right now the game is in the public play test stage and has a kickstarter planned for next year.

This is just a literal first look as I have not even read the play test document yet.

There are lots of things you want to see if you are looking at something that shares its DNA with Rolemaster and MERP. Open ended rolls are one and they are definitely in here, skills based characters are they are in here, combat tables are here and criticals. All of those you can tick off.

The character creation is a little different to how I remember MERP being. Here you just get some may bonus points to distribute between your stats. This not uncommon in Rolemaster circles as the actual 1-100 stat is never used just the stat bonus. vsDarkmaster has gone down the same route and scrapped the unused 1-100 stat and just kept the stat bonus.

VsDarkmaster has eradicated the work Race from the game and uses Kin in its place. Despite the name change the kins are exactly how I remember the MERP races to be and they have even retained the Background options. If you never played Rolemaster or MERP then you can spend background points to get some form of bonus for your character such as a magic item as starting equipment or extra money or something less tangible like coming from a respected family or a bonus to one of your stats.

Characters each have a culture and these give you a selection of skill ranks that you can spend buying skills. Skills are all grouped into categories and the cultural skill ranks are distributed amongst these categories so you cannot just pile them all into combat or magic!

Character classes or Professions are called Vocations in vsDarkmaster. There are six vocations in this play test version Warrior, Rogue, Strider, Wizard, Animist and Dabbler. the first three have no magic and the last three are all spell casters.