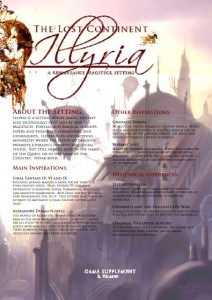 Some time ago our fellow RPGBlogger Philippine Gamer has posted about a D&D 4th Edition campaign setting a member of his gaming group, R. Velasco, created: “The Lost Continent Illyria – A Renaissance Magiteck Setting”.
Although (or perhaps because) I am currently working on my own project “World of Asecia”, I had to check out his work.
And I was totally blown away. The setting is only 14 pages long but it’s very well written and uses some great artwork. The PDF document almost looks like a professional roleplaying sourcebook on par with WotC’s work.
Here’s an excerpt for your convenience:

Illyria is a setting where magic, fantasy and technology exist side by side.

Magitech, Portals and Magical skyships, espers and engineers, summoners, and gunknights. Illyria is an unforgiving monarchy where the blood of dragons promote a person’s identity and social status. But still heroes arise in the name of the Queen, or in the name of the Country. Never both.

If you are looking for some setting for your D&D game or some inspiration for your campaign check it out! You won’t regret it!