You are in dire need of a dungeon map for your next adventure but you lack the artistic abilities to draw one by hand?Then you should have a look at “Ye Olde Map Maker“. This web- and flash-based tool allows you to create small dungeon maps in just a few minutes. It’s pretty easy to use but is limited to simple dungeons with rectangular rooms. If you need rooms and corridors that resemble natural caves you are out of luck. BUT “Ye Olde Map Maker” also allows you to view and print maps created by other people. And especially this feature can be a life saver when your group is already sitting around the gaming table and you still have no dungeon for today. 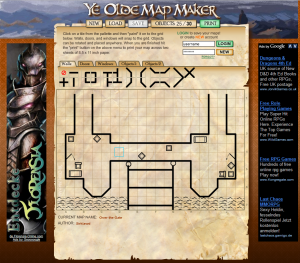 And if you are into dungeon crawls, there’s also a great review on random dungeon generators at Inkwell Ideas.