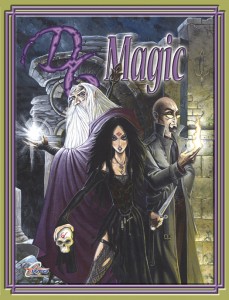 Today West End Games has released Vaede Mecum of Magic (aka d6 Magic) for free. It’s a supplement for d6 Fantasy and d6 Adventure that expands on the Magic system presented in those books. As far as I know it had never been released in print before and you can now download it for free from the original WEG website.

The 109-pages PDF does not only include new rules for the existing Magic system but also introduces several variant Magic systems, a spell creation system, rules for magic items and a lot of precalculated spells from ten different schools including such exotic schools like Chronomancy and even Technomancy.

The PDF’s layout is pretty basic and it contains no illustrations. Overall the PDF has all the trappings of an unfinished product, but since it’s for free, it doesn’t really matter. You get a lot of material for your d6 System game and that’s all that counts.

Thanks to Eric Gibson for making this book available to the public!
For more details and discussions check out this thread at the WEG Fan Forums.

UPDATE: There’s another thread with some info on D6 Magic.