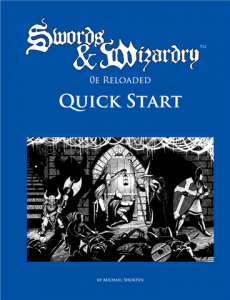 “Swords & Wizardry” is one of the popular retro-clones that try to bring back the charm of the original roleplaying game from 1974. But although S&W is much easier to read than the original game designed by Gary Gygax and Dave Arneson it’s still over 100 pages long and might turn away new players just because of its size.

What I like the most in S&W QS is Michael’s writing style. When you read the rules you feel as if a good friend is sitting in your living room describing you how the game is played.  Let me give you an example:

Generate ability scores: Roll 3 six-sided dice (3d6) to generate scores for Strength, Dexterity, Constitution, Intelligence, Wisdom and Charisma. Do not swap scores, adjust points, or otherwise fiddle with the numbers. Just roll the dice and write them down in order on your sheet. Really high scores are not needed to have fun with this game!

Over the next few pages Michael explains in all details how the game is played and how adventures are run by the Game Referee. The included adventure acts as an introduction into running the game and includes a lot of valuable tips.
From what I’ve seen the S&W Quick Start is the perfect way to introduce new players and GMs to roleplaying. And I am sure even veteran players may find the read enjoyable, especially when they are new to S&W and similar retro-clones.

Another highlight of the book is the artwork. Of course the book doesn’t contain as much artwork as any contemporary D&D book but the b&w artwork is looking great and is very fitting. When I am honest I could find just one flaw in the entire book: it’s just meant for 1st-level characters. But perhaps Michael can be convinced to expand the book a bit, so that characters can advance for a few more level before the full S&W rules are needed.

And by the way, although the rules are available for free as PDF, consider buying a couple of paperback copies and give them away to people that might be interested in some old-school roleplaying. Michael won’t get rich by that (he only gets 25 cents from each purchase) but it will help him pay the artists (they have worked for free) and help him to fund future projects like his Ultima RPG.