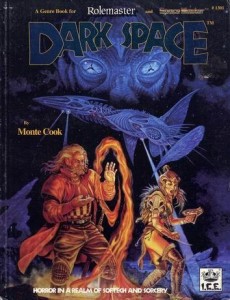 In a recent conversation that I had with Rob Donoghue over Twitter I learned about Dark Space. Dark Space was a campaign setting that Monte Cook created back in the early 1990s for Rolemaster and Spacemaster.

Dark Space is a complete campaign setting well as a unique combination of science fiction, fantasy and horror. Contained within are detailed descriptions of twenty different worlds and the society that binds them together. Organizations, religions and governments of this fantasy/high tech society are included as well as a number of new races and beasts unique to the setting.

That’s about as much as I could find about this campaign. But the combination of these different genres looks pretty interesting, alas Dark Space has been out-of-print for quite some time. So, does anyone know if there’s still a way to get a copy of Dark Space? Is there a PDF copy somewhere, is someone selling it on eBay? Your help is appreciated.

Aside from that, do you guys know the setting and can you give me a few more details about it?