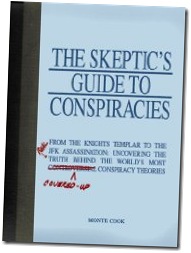 I was a skeptic, a non-believer until I bought Monte Cook’s latest book “The Skeptic’s Guide To Conspiracies”. At first I was enraged to see that they sold me an obviously used book. Someone has added notes in red letters to certain parts of the book, there were coffee stains and dog ears all over the book. But I started to read it anyway.

Monte Cook writes about various famous conspiracies from the Templars and Freemasons to the JFK Assassination. After a while I didn’t mind that someone has already read the book before, because some of the comments were eye-opening.

There really are Freemason symbols on the dollar bill, aren’t there? And I always knew the Knights Templar were up to something. Paul McCartney is dead and John Lennon was killed because he wanted to tell the truth! I knew it! If I hadn’t read Monte Cook’s book, my eyes would have been kept closed forever! I would have been a sleeper like the rest of us…

Around that time I started to notice the changes. Every time I used my office phone, I heard strange crackling noises. Have they already wire-tapped my phone? And is the van outside really from the telephone company? And why did my boss have that strange look on his face when he saw Monte’s book lying on my office desk? I know it: THEY ARE WATCHING ME! I AM NOT SAFE ANYMORE AND NEITHER ARE YOU! 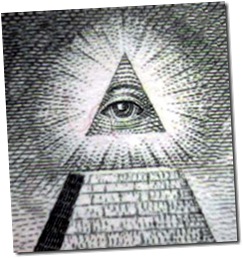 I hope you are still with me. Of course I don’t believe all those paranoid theories are real. I just tried to write a funny and fitting introduction for my review of Monte Cook’s latest book. The 272-paged softcover book is not necessarily a RPG supplement, but in my opinion, it can be very much used as such.

At its core its giving the interested reader about all the twisted conspiracy theories out there. But there’s a twist. The whole book is given a used look (with the aforementioned faux coffee stains and notes scribbled by some unknown conspiracy theorist). You can definitely read it as a serious but funny treatise on conspiracy theories, but you can also use it as a inspirational goldmine for your modern-age roleplaying game. The book even comes with a “create your own conspiracy theory” generator in the appendix. Creating weird adventure seeds is as easy as rolling a few dice.

In my opinion “The Skeptic’s Guide To Conspiracies” is a fun read for everyone even remotely interested in conspiracy theories. Skeptics will probably have more fun than true believers though. Another possible target audience are GMs who want to run a modern RPG campaign laden with conspiracies, weird phenomenon, politics and intrigue. Pick your favorite theories, throw in a few random monsters and aliens, stir and you’ve got a great campaign reminiscent of X-Files!

Pre-pre order Ashen Stars now and get a lot of cool stuff at release!

NaGa DeMon: What’s In a Name?