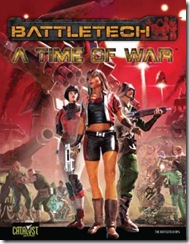 If you are interested in the Battletech roleplaying game “A Time of War”, Catalyst Game Labs has a special offer for you.

They have released the upcoming game as a beta release for just $10 at RPGNow. The current available PDF is 402 pages long and is of course not 100% complete yet. The index is still missing, but the book itself is looking pretty good.

If you are unsure if this new game is for you, you should check out the quickstart rules that have been released quite some time ago. In my humble opinion it looks much better than Mechwarrior 3rd Edition and it should be compatible with the rest of the core game series.

Interested players will be able to playtest the game and post any issues they encounter at a special thread a the Classic Battletech forums. The designers of the Battletech RPG are also looking for more adventure seeds like the one presented on pages 347-348 in the book. So, if you have a great idea, you can post them here and if you’re lucky and your seed is accepted, you will even be mentioned in the credits of the final release.

The final release of the PDF will set you back $25 and all people who purchased the beta release will of course get a free update. So, if you are interested in the upcoming Battletech RPG, you should consider this offer.

Come to me my jungle friends!