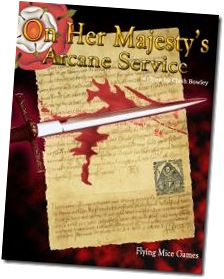 I recently got a copy of Flying Mice Games’ RPG “On Her Majesty’s Arcane Service” from RPGNow (RPGNow Affiliate link). The 234-paged roleplaying game is a perfect example of an interesting game that suffers from poor layout, some unreadable fonts and artwork of varying quality.

Premise
On Her Majesty’s Arcane Service is a RPG set into an alternate mid 16th century where magic, vampires and demons are real. Queen Elizabeth has just recently risen to the throne of England and has established a secret organization, the Arcane Service, lead by her Astrologer Dr. John Dee. The players are members of that organization and are tasked with the defense of the realm against magical assault.

That premise was what made me interested in OHMAS in the first place. The 16th century is pretty much uncharted territory (at least when RPGs are concerned) and I like the idea of the player’s being some kind of arcane secret agents of the English crown. Alas this awesome premise is marred by poor execution.

Layout from Hell
Most of the book is laid out in a two column format, where the left column contains only the titles of the paragraphs on the right column and vice versa every other page. And to add insult to injury the text is left-aligned and not justified which makes it pretty hard to read. A proper layout would not have made things easier to read but also significantly reduce the length of the book.

Introduction and background
But let’s ignore these problems for a while and focus on the game itself. The book starts with a short introduction on the setting, the world’s history and the current religious and political situation. This introduction helps to set the mood but is much too short to give a proper overview of Europe in the mid 16th century.

Character types
The next section explains the different types of player characters in detail. There are Path characters, champions of various parties with magical abilities, and Non-Path characters who are mundane people who use their skills in any way they can to resist the Creatures of the Night. Then Hunters, Templars, Half-Angels and other characters are described with a few paragraphs each. Alas this section left me with more questions than answers.

Character Creation
The next section of the book finally describes character creation. Characters are described by five physical attributes (Strength, Coordination, Agility, Endurance and Charisma) and the non-physical ones (Intelligence, Magical Potential and Family Lifestyle). Players can either create their attributes randomly by rolling the dice or by distributing 44 points between the physical and 100 points between the non-physical attributes.

The skills a character knows are determined using a lifepath system. The player starts with 4 ranks of Skills he acquired before he was 10 years old, then he decides on an Apprenticeship. At the age of 16 the character becomes a Journeyman in his chosen profession. Basically a character can enter any profession he chooses, as long as he meets all the requirements. I think I have mentioned before that I am very fond of life path systems and usually they help to create interesting characters with ease. OHMAS provides players with a lot of career choices including but not limited to the Thief, Archivist, Bounty Hunter, Dancer, Musketeer, Lord or the Playwright.

Character Options, Paths and more
The following section “Character Options” describes how characters can follow one of the Paths (like Hunter, Esotericist or Templar) or how to create Half-Angel or Changeling characters. The different Paths are described rather detailed and sound very interesting. But alas the whole character creation section shows that this book is in dire need of a 2nd edition that is properly laid out. I had to constantly flip forward and backward several pages to barely understand what the author wanted to tell me. And often concepts and/or rules are mentioned long before they are actually described in the book. And the strange layout isn’t helping.

I surrender!
I have to admit that reading through the rules is not really enjoyable. The more I read the more tedious it gets. Don’t get me wrong, I believe that OHMAS is full of great ideas and a fresh setting that could be a blast to play in. But the deeper I delved into the book the more it felt like work to me. So I decided to conclude the first look at this point. If you are interested in reading my thoughts on the rest of the book, please let me know in the comments below and perhaps I will write about the rest of the book at a later date.

Some clarification: I usually try to avoid bad reviews. When I don’t like something, I don’t review it. Sometimes when I am excited about something but I haven’t had the time to write a proper review, I do a first look. First looks are based on a first read through, sometimes just I just have leafed through the book several times. While I still think the premise is awesome and that it shows that the author put a lot of love in this game, I just wasn’t able to write a good first look about it. Too many things (like the layout) have put me off. And perhaps if I have a lot of free time, I will give OHMAS a second chance. The idea behind this game is just too cool to give it up so easily.