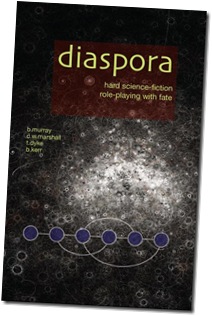 Recently I heard about the hard science-fiction RPG powered by FATE called Diaspora. I am a big fan of everything science-fiction and so I read a few reviews, checked out the official website and finally I decided to buy it. A few days later I had the 238+ paged hardcover book in the mail. For a few days this book has been my constant companions on my daily commutes.

The authors of Diaspora managed to create a game that has a hard-science feel to it without being overly complex. Usually hard-SF games tend to use simulationist approaches but Diaspora focuses on narration and story instead of rules. The other aspect that I really like is the setting. Instead of providing us with a fully-fledged out setting, we get a toolbox to create your own worlds in the larger frame of the Diaspora setting.

Please note that this post is not meant as a proper review. If you look for more in-depth information of the game and its underlying system, I am sure you can find a lot of sources on the ‘net. I just wanted to share my enjoyment of the game here and tell about a few things I like.

I don’t think I need to introduce the FATE system to my players. If you have been following my blog for some time now, you probably read my review of FATE 2nd Edition already. Diaspora is powered by the third edition of FATE, the same rules system that was used in the popular Spirits of the Century RPG. What makes Diaspora the perfect game for any FATE newbie is the fact that it’s incredibly well-written. I’ve never seen the FATE rules explained better than in this book.

What I also enjoy very much is the format of the book. It’s approximately the size of the Savage Worlds Explorer’s Edition and is much easier to lug around than standard-sized RPGs. The cover is extremely beautiful, if you ask me, and although the book is neither full-color nor contains a lot of artwork, it’s a very good-looking book.

But back to the game itself. If you are used to games like Traveller or GURPS you are in for a change. In classic SF games the GM is the one who creates the subsectors, everyone creates his own character without much input by the other players and in most cases the player cannot affect the game world through any other means than his character’s actions. That’s different in Diaspora. Even creating the cluster of solar systems the game is set in is a group effort between the GM and the players. When creating characters you have to reference one of your fellow player characters at least once. This may feel strange at first, but my experiences with PDQ (a game that shares many aspects with FATE) showed me that you get used to the narrativist approach pretty fast.

What I definitely like best about Diaspora is that it’s more like a toolbox. You can use the Diaspora setting or you can easily use one of your own design. If you want to introduce psi powers or perhaps even magic just take the rules from any other FATE-powered game and plug them into your Diaspora game. But even if you want to run Diaspora as it is, it’s one of the most interesting hard science fiction games I’ve seen!

Free Music for use in your games