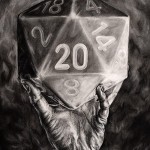 Dice are a very important part of most role playing games. Without out a good set of dice you would not be able to roll up your character, let alone slay a dragon. They are just as important to people who play roll playing games as the story they are playing through. Some people take this very seriously. I remember reading a story some time back about a player who buried his dice in the back yard after a bad roll that resulted in the death of his character. Yet others are more than willing to share their game dice with a new player. It all depends on the person.

As important as dice are to players, the way they roll their dice is just as important.  Some people give them a quick shake in the hand and let them fly. Others will spin their dice  high into the air and let them drop down right in front of them. Yet, others will blow on their dice casino style before they roll. Each person is hopping that these little rituals they do with their game dice will improve the out come of what they roll. You can witness this first hand by watching Chris Perkins and the writers from robot chicken playing Dungeons & Dragons. Each person (most of which are new to roll playing and have never touched a d20 before) has their own roll style.

When I was looking at getting into Dungeons & Dragons last year I started by picking up the Dungeons & Dragons Foruth Edition RPG Starter Set. When I got home and opened the box one of the first things that poured out into my hands was my first set of dice. Up till this moment I had never owned my own set of dice. With the six multi-colored dice in my hand my mind exploded with possibilities of the other kinds of cool dice I could get. I think I spent hours that first night searching the internet for dice. That should show you how important dice are to me.

After looking though all the Steel, Bone, Hematite, Opaque, Translucent, Glitter, Speckled dice the internet had to offer I settled on a set of Green opaque dice with white numbers. Green being my favorite color and opaque making it easy to read the white numbers. Sometimes settling on the simplicity of just being able to read quickly what you have rolled is more important and time-saving then getting a crazy translucent yellow dice with elvish print that takes you way to long to read after it’s stopped rolling. That’s just my preference. Everyone has their own and that is what makes this topic so fascinating to me.

Recently my views on dice all came crashing to the ground thanks to a company called Game Science. One of the things Game Science states about their own dice is:

“My company makes polyhedral dice closer to casino specifications” (casino dice must be exact to a tolerance of .005″ – Gamescience dice have been measured with a side to side variation of .002″ to .006″)

So with a sharp edge on the Game Science Dice, your roll is truly random since their are no curvature variations. The sharp edges also allow for better stopping power.
Now, is all this true? I honestly don’t know. I think casino’s have have sharp edge dice for a reason and I think that holds some weight. Game Science has two videos on their website with the owner talking about his dice and why they are better then all other roll playing dice on the market. After watching the videos the guy lays down a pretty convincing argument. But he is such a good salesmen I also think he could sell sand to a guy living in the desert.

After watching these videos it’s hard for me to know if one brand of dice is truly better then any other brand on the market. I just don’t have enough validated facts to say one way or the other. As important as dice are to me and to roll playing games in general the biggest reason I play D&D is to have time set aside in my week to meet up with my friends and socialize. I don’t need casino grade dice to do that.

With all that said I drank the Kool-Aid and  ordered a set of Lime Green Game Science dice.

So I can review them…