I guess we all have done that at least once:

There is a new supplement for my favorite RPG, but I am kind of lukewarm about it. I guess, that I will not really need it. But still…I have bought everything else that has come out for that particular RPG. So – come on! I will always know, that my collection is incomplete without it. The place between the books that came before and after will be a gaping void, mocking me for my stinginess. It is my favorite RPG after all, right? Even if I will not really use it, just having it will be good and reading through it will be fun. So I place the order. And the book arrives. And it is worse than I imagined. To be brutaly honest, it is next to useless and a waste of perfectly good paper! 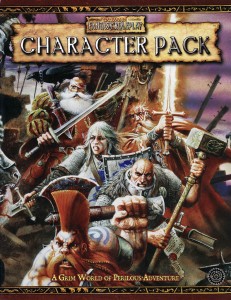 By Sigmar! Why did I buy this turd of a supplement??

My personal “worst buy” was the Character Pack for the 2nd Edition of Warhammer Fantasy Roleplay by Black Industries. I have always been a HUGE fan of Warhammer Fantasy Roleplay, with the 1st Edition being my very first RPG back in the day. So when Black Industries came out with the new edition in the mid-naughties, I religiously picked up every single publication. And I really loved what they did. Great stuff – except for the Character Pack.

What did I get in that thin supplement?

I got 50 copies of the same bland Character Sheets, that I could easily have photocopied from the rulebook! I really expected them to be a improved, more beautiful version. Nope – the same stuff as in the rulebook
But there also is a 16-page booklet – there has to be some good stuff in there! Actually…no. Inside you’ll find:

These were already in the rulebook! Ok, they are slightly expanded here…

I needed those like a fish needs a bicycle.

Ok, somehwat useful – if you have handwriting, that fits in lines for 6pt fonts…

Great! So I get a second copy of the Character Creation Chapter form the rulebook! Woohoo!

Yay! Now I have three copies of this: In the rulebook, on the GM-screen and in this booklet!

The big joke, to round it all off: The Character pack was packed in a double-sided, flimsy sheet of paper. On the inside there is a selection of drawings, that I would classify as drafts.

As you can guess, I was not really happy with my purchase.

So, what purchases do you regret? If you could travel back in time to keep yourself from buying one RPG supplement – what would it be?