Recently fellow RPG blogger and one-time guest blogger here at Stargazer’s World Ravyn has moved her blog. She has been thinking about that step for a long time and now she’s made the move. The new blog is still a bit low on content, but she’s currently working on getting the copyright for her hard work back, and then she’ll probably migrate the old content to the new site, too.

The new site is still under construction, but if you are interested in Ravyn’s writing, you should check out the brand-new "Exchange of Realities” blog! You won’t be disappointed! 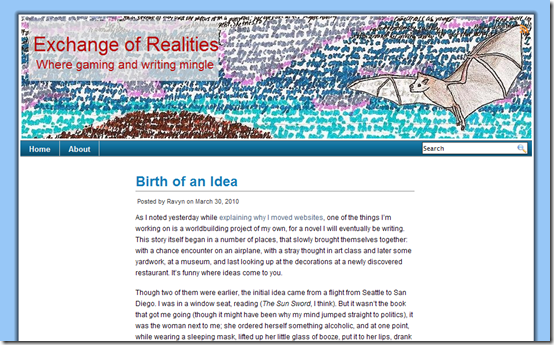 I also want to use this post to wish her Ravyn all the best of luck with her new blog! I am also looking forward to the upcoming blog carnival hosted by the “Exchange of Realities” with the subject “Let Me Show You My (N)PC”. This could be fun!