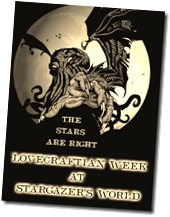 Last week we brought you several post on gaming inspired by the works of H.P. Lovecraft. But all good things have to come to an end, and so the “Lovecraftian Week” concluded with a Lazy Friday Video Post featuring Lil Cthulhu.

The success of the event was overwhelming. We had 6,298 page views last week and Cody from “Kingdom of Geeks” joined us and wrote several Mythos-related posts as well. Perhaps we should have these themed weeks more often!

But now let’s have a look at the contributions to the “Lovecraftian Week”. I want to start with Cody’s posts here:

But he haven’t been lazy over here at Stargazer’s World, either, so without further ado, behold our contributions:

While the "Lovecraftian Week" is technically over, I’ve heard that my friend Roberto has still one unpublished post on the topic up his sleeves. Stay tuned, it will go live when the stars are right again!