Some time ago, when I was just getting on this superhero bandwagon I wrote a post about supers, including a tool to illustrate characters called Hero Factory (Fábrica de Heroís). On that post I included some samples of characters I had illustrated using that program.

Shortly after doing that I purchased the ICONS rpg and had the idea to write up these characters using the ICONS rules. On previous posts I have rolled up a character using the random character generation method and tried my hand at creating a worthy villain for the hero.

This time around I’m doing something else. I’ve stated up two characters from a supers campaign I’ve been working on. First is Avatar, a superhero that’s been active since the late 1930s, specifically his incarnation during the 1980s. Also on this post is one of the world’s foremost villains, the wicked reptilian Dr. Rex!

On both cases I created them according to how I had conceived the characters and they may break some of the character creation rules. If you decide to use them for your game Avatar could be an ally to your heroes, a famous paragon of all that is good, or might be an evil version of the character from an alternate reality. Dr. Rex is an evil mastermind that I think may challenge some heroes, depending to whom he is allied or what minions he has recruited for his nefarious plans.

I’d love to get some feedback from those of you who have some experience with the game. How do you see the characters? Is Dr. Rex and appropriate challenge? Even if you don’t play ICONS, what do you think?

I’ve reproduced the text for both characters here in the post as well as including PDF copies of both Dr. Rex’s and Avatar’s character sheets. Enjoy! 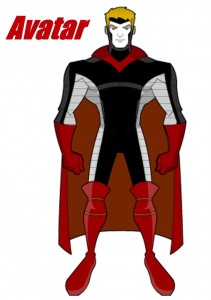 “When I saw him plunge into the inferno that was the Hindenburg, to rescue passengers, I knew I had witnesses an event that would change the world as we knew it! I was just a junior reporter back them, but the only one from the Star there so I got the byline… It was me who gave him the name Avatar. I wrote he was an ‘avatar of the future of man’, and it stuck!” Jeannette “Jeannie” Johnson, retired editor of the Halcyon Star in an interview for Super-Insider, 1997

In 1986, seven years after his disappearance during the Xyhidrion affair and the purported invasion by hostile aliens, the long believed dead Avatar reappeared in California, just as other super humans were being reported all across the United Estates of America. This marked the e of what scholars of the super human culture later called the super black-ops period.

Avatar soon organized other west coast supers into a new version of the Protectors. The original Protectors under Jamaal Warren had never truly disbanded and after his death various lesser known vigilantes had claimed membership, so Avatar’s new Protectors became known as the Western Protectors.

While Avatar seemed as formidable as ever he soon displayed powers hitherto unknown. When the media questioned him about them, his return, or any other details about his disappearance, Avatar offered no direct answer. He also stopped using the name Robert Hurrington and simply became Avatar.

The Congressional Committee looking into the Iran-Contra-Blackthorn affair probed the Blackthorn’s corporation ties to the Xyhidrion affair and summoned Avatar, but he refused to testify. Unlike the Nixon Administration scandal and ensuing conflict this time the US Congress took no action to force him to testify and simply dropped the matter.

Through the remaining 80’s and early 90’s Avatar was an outspoken defender of superhuman rights and a leader in the community, spearheading the reunification of the Western Protectors and the New York team, and the formation of the Protector Plan to recruit and train superhumans  across the US, Canada and Mexico.

Unknown to the general public Avatar was not resurrected in the truest sense of the word.  After his physical form was destroyed during the final battle against the Xyhidrion Ultra Command the energy that first gave him his power when Robert Hurrington discovered the Kyridion Cristal in the meteorite remained behind. Hurrington consciousness survived somehow in the energy itself. It took him years to reform and recreate in a semi solid physical form. Avatar powers stem from this light form instead of the physical might that made him famous. This new form required all his concentration to maintain his physical form and when at rest or distracted Avatar often became insubstantial. He also had problems establishing emotional connections with his previous memories and new relationships. 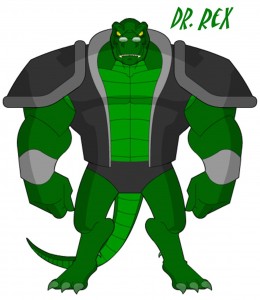 When the Gaj’Ianian Seedling ships began their genetic experiment on earth during the Cretaceous Period a group of the Xyhidrion’s servitor race took some samples of the native fauna of earth during this period and began experimenting with them on their secret underground base in Europa, the sixth moon of Jupiter.

When the Gaj’Ianian were driven from the solar system by the Otherworlders, the godling armies did not discover the base in Europa, and the Gaj’Ianian experiments continued unrestricted. The genetically manipulated descendants of the dinosaurs of earth eventually became a new sentient race, the Reptiliars. The Reptiliars in turn served their creators for centuries.

Rehuzzarr was a special Reptiliar, the result of a lengthy experiment by the Gaj’Ianian to create a champion that could face the Otherworlders, but Rehuzzarr had other plans. He led a revolt against the Gaj’Ianian, who in turn destroyed the Reptiliar population in Europa.

Rehuzzarr survived and in his defeat he concocted a new plan, he would return to the birthplace of his people and reclaim his birthright. As the last survivor of his people he came to earth to destroy the human race and make reptiles the true rulers of earth as it should have been. He believes the experiments by the Gaj’Ianian altered the natural evolution of earth and is convinced his people would have evolved naturally on Earth.

His attempts at genetically manipulating reptiles, mass extermination and repeated attempts at taking over Earth have brought him into direct conflict with many superheroes; to them he has become known as Dr. Rex the Reptiliar Mastermind!

PS – The most observant amongst you might have noticed that the original post where this two character’s appeared included a third character, Lt. Liberty. I still have not written up his character. Promise to get to it as soon as possible!

When your campaign has jumped the shark