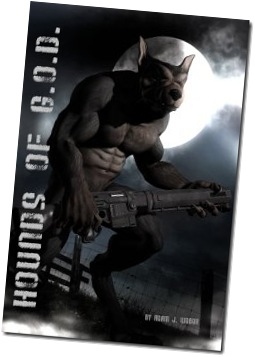 Hounds of G.O.D. by Adam J. Weber Games is a  40-paged roleplaying game which is crammed full of awesomeness. Hounds of G.O.D. is set into a dystopian future. A minority of the population benefits from all the technological and medical advances while the vast majority has to survive the harsh live of the vast urban sprawls.

The Hounds are genetically modified agents of the U.E.C., the United Earth Corporation. Each Hound has two sets of DNA, a regular human one and a wolf one, which allows them to change between three forms: their human form, a hybrid form and a wolf form. So, basically they are werewolves created by modern genetic research. The G.O.D.s are the Hounds handlers also known as Genome Operative Directors. They hand the missions out to the Hounds and make sure they don’t go rogue.

Character creation is semi-random, since you randomly determine the attribute values by rolling ten-sided dice but skills are purchased by points. The game assumes everyone is playing a Hound. But with some modification of the character creation rules playing other characters should be possible as well. The PDF contains all the rules necessary to run a Hounds of G.O.D. campaign. There are even a couple of NPCs included.

What makes Hound of G.O.D. so awesome? For one, you get to play Werewolves with guns who are tasked with hunting down criminals, tracking down rogue Hounds or finding missing persons. The rules and the setting intentionally leave a lot of things open, so that the GM can mold the world to his liking without the fear of breaking something. But the setting is also inspiring enough to give you dozens of cool ideas.

Hounds of G.O.D. definitely sounds like a fun game, that’s perfectly suited to one-shots or short campaigns, especially if you like dark dystopian SF and werewolves. In my opinion it’s definitely worth its price! You can get Hounds of G.O.D. at DriveThruRPG for just $7.

This preview is based on a PDF copy of the game that has been provided by the author.