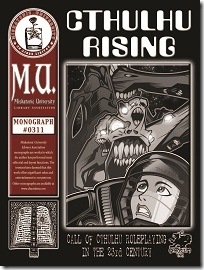 Cthulhu Rising starts off as a classic SF setting. Humanity has reached the stars, FTL travel, extrasolar colonies, androids and artificial intelligence are commonplace. But behind all this lurks the shadow of the Mythos. Although the Mi-go have abandoned Pluto quite some time ago, they are still active on Earth. Several Deep Ones have migrated to the Jovian moon Europa and even deeper into space and Cthulhu still lies dreaming in the city of R’lyeh.

The first part of the book provides Keepers with extensive details on the politics of the 23rd century, the colonies and the future history. The second half of Part One focuses on the Mythos aspects of the setting. That way the basic setting and the GM material are somewhat separated. This allows Keepers to run Cthulhu Rising as a classic SF setting with no Mythos influences or they can pick and choose, which aspects of the Mythos they want to add to their game.

The rules section expands on Call of Cthulhu’s character creation rules, provides fitting backgrounds for the 23rd century and even adds Psychic Powers to the game. The combat rules of Call of Cthulhu are also expanded. The book concludes with an extensive list of equipment including energy weapons, power armor, and pretty much everything else an investigator might need.

All in all Cthulhu Rising is somewhat of a mixed bag. While I like the setting, the new Psychic powers and the overall presentation of the book, it does feel like a generic SF game with some Cthulhu tacked on, almost as if the Mythos sections were added as an afterthought. Don’t get me wrong, Cthulhu Rising is a great product, especially if you are into SF, but don’t expect the Mythos to be intertwined with the setting as in Cthulhutech for example.

I got my copy of Cthulhu Rising at DriveThruRPG. The 92-paged book sets you back $12.75. Later this week I will post my review of “End Time” which presents a totally different future…