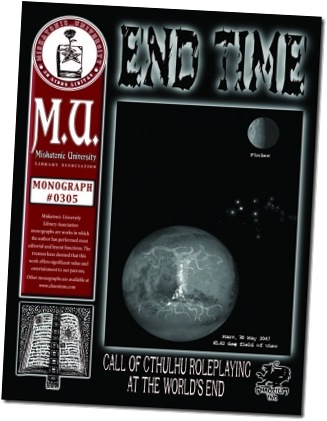 Dr. Michael C. LaBossiere’s End Time is a dark vision of the future, a world where the stars where right and humanity had to abandon Earth. The book itself also had a quite tumultuous past. The basic idea came from LaBossiere’s own adventure Blood Moon which has been published in Chaosium’s Strange Aeons. Then “End Time” was meant to be published by Pagan Publishing but there were some licensing issues, so the project died in 1993. Luckily the author kept his manuscripts and so it could finally be released as part of the Chaosium monograph series.

Since I have reviewed “Cthulhu Rising” just a few days ago, it’s pretty hard not to compare the two books. End Time definitely feels more “Lovecraftian” than Cthulhu Rising. But that doesn’t mean it’s the better book.

End Time starts with an extensive section about the future history. What finally lead to the End Time is as follows: (Warning! This section contains major spoilers!) Due to human tampering an enormous alien entity originally created by the Mi-Go awakens on the moon and starts to influence the moons orbit. R’lyeh rises above the ocean and all hell breaks loose. In the end humanity has to abandon Earth and flee to Mars. In 2056 the Earth the last message from Earth is received.

The book then provides some details on End Time Moon, End Time Mars (with the two human colonies Hope and Bradbury) and End Time Earth. Especially the sections about the two colonies are very detailed, but alas there are no maps. That’s one of the major drawbacks of the book. Aside from a few illustrations later in the book, End Time totally lacks artwork. The fact that the book’s layout is also pretty bland doesn’t improve things.

But back to the contents. End Time adds a few new Mythos creatures to the game (like the Cthunund Uleths and the Martians) and there’s also a new Great Old One by the name of Vulthoom. The Cthunund Uleths are definitely my favorite here, because they closely resemble the Thing from the John Carpenter movie.

A large section of End Time focuses on life and death on the Mars colonies. There’s even a section on the Martian Dreamlands. It’s obvious a lot of work went into developing the world in all its details but alas the book itself feels a bit unorganized and unfinished. But on the other hand a dedicated Keeper who wants to run a game using LaBossiere’s vision of the end times you’ll get a lot out of this book. It’s just not as easily consumable as Cthulhu Rising for example.

The book concludes with an extensive section of character creation and appropriate equipment for the 22st century. Perhaps I should also mention that a large section of the book contains Sanity rules and long descriptions of psychological disorders. I have admit I haven’t compared these rules to closely with the ones in the Call of Cthulhu rulebook, but I guess that there must be some subtle changes.

All in all, I have to admit I really like the setting presented in End Time. While it may not be 100% compatible with the canon, it’s interesting and adds some new aspects to the Mythos. But alas the presentation is not as good. The book could benefit from a reorganization and the addition of more and better artwork.

But if you can look beyond these issues, End Time is definitely worth it. End Time is available at DriveThruRPG for $13.50. Please note that this review was based on a read through of a PDF review copy provided by Chaosium.