Moritz Mehlem, a German old-school advocate who is pretty well known for his blog “Von der Seifenkiste herab” and his involvement in the Labyrinth Lord community, has recently started releasing his works on DriveThruRPG/RPGNow under the “Soapbox Games” name. I’ve had the chance to review some of his works.

Let’s start with The Adventurer, a new class for Labyrinth Lord. This new class has been inspired by a similar class from the classic German RPG “Das Schwarze Auge” (The Dark Eye). The Adventurer is a perfect class for any character with subpar attribute values. What he lacks in talent he makes up in versatility. Even a level 1 adventurer can tend wounds, use all one-handed and ranged weapons and light armor. Later in their career they get the ability to read various languages, read scrolls and even cast spells. Of course the adventurer is never as good as a member of the more specialized classes, but he definitely sounds fun to play. When reaching 9th level the adventurer is allowed to build his own inn and he becomes and important person in that area.

The Adventurer is a 5-paged PDF supplement for Labyrinth Lord but it should be compatible with most D&D retro-clones. I very much enjoyed reading this booklet and I hope I get to play an adventurer once. This really sounds like a lot of fun! The PDF sets you back mere $0.75 and it’s available in an English and German version. 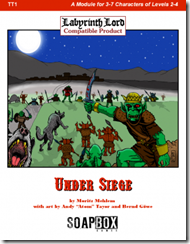 Now let’s direct our attention to Under Siege, a Labyrinth Lord module for 3-7 characters of level 2-4. As the name of the module implies the party takes part in the defense of the small village. The main story of the module is quite linear, but the author added several interludes to spice things up. Basically Under Siege is mainly combat oriented module, but there are several opportunities for roleplaying. If your players like to crush goblin skulls, they will have a lot of fun with that module.

The 37-paged PDF contains a lot of black & white artwork and is pretty well organized. The appendix contains all the monster and NPC stats, a checklist for killed enemies, and even a couple of pregenerated player characters. But what really sets Under Siege apart are the battlemaps and paper miniatures! Yes, you read correctly. Under Siege contains battlemaps for the whole town of Larm and paper miniatures for all player characters, NPCs and monsters. Considering that the module is just $5 you get quite a bang for the buck! Under Siege is currently available in English language only.

If you are a fan of old-school fantasy gaming in general and Labyrinth Lord in particular, you definitely should check out Moritz’ stuff. Currently most of the products released are in German language only, but there’s still hope that he’ll release some more English products in the future.