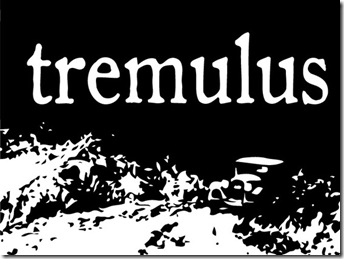 During this blog’s history I’ve written several times about games Reality Blurs’ Sean Preston worked on. In 2010 during Gen Con I first had the opportunity to meet him in person. In 2011 I finally managed to do an interview with him, in which we talked about Agents of Oblivion which had just been released back then.

While I am writing these lines Sean’s latest project is getting funded at Kickstarter. Last Monday he launched a Kickstarter to fund tremulus, his storytelling game of Lovecraftian Horror. Especially the first day was extremely exciting. Tremulus met its goal and the first stretch goal in under 24 hours! I am very excited about this upcoming game and I thought you might be as well, so I asked Sean if he were interested in joining us for another interview.

Stargazer: Hi, Sean! It’s good to have you on Stargazer’s World again. The tremulus Kickstarter has been quite a ride thus far. Don’t you agree?

Sean: Hello, Michael. I’m absolutely overwhelmed by the positive response! Kickstarter made it a Staff Pick, featured it on the blog, and people are buzzing about it across the social media platforms. I should probably calm down, and try to sleep sometime, but I’m too jazzed right now. Heck, the whole team is!

Stargazer: I’ve been playing cheerleader for tremulus for a while now, but perhaps you could tell us what tremulus is about with your own words. What is tremulus and what sets it apart from other games you have worked on before?

Sean: tremulus is a storytelling game of Lovecraftian horror. It is described as a semi-improvisational game where you and your friends craft a story made of nightmare and events unfold before everyone’s eyes. It’s based on Vince Baker’s Apocalypse World Engine and is influenced by elements of Fiasco and Fate. In tremulus, I wrote it with a style completely different from anything I had written before. When developing support materials for other products, you have certain parameters and expectations you need to adhere to organizationally. In this instance, I was uncaged. I could structure and organize it however I saw fit and took steps to present it in a fashion for both new and experienced gamers (such as introducing term early on, include lots of examples in a central area, and so on). Ultimately, this game allows everyone to enter a shared space to build a horror game together, so, on the story level, it provides parameters but doesn’t get into the intricate details present in some of my other work. I’ve taken all the lessons I’ve learned from design and development, and have put them together in one space.

Stargazer: Can you tell us a bit about how you came up with the idea for tremulus?

Sean: It’s no secret I have a passion for dark horror. I’ve touched upon it to some degree in all my work, whether it be in RunePunk, Realms of Cthulhu, or Agents of Oblivion. tremulus began as a passion project, something I worked on secretly in my spare time until I felt ready enough to share it with the Blurry Ones (what I call our crack team of designers, developers, and editors). After their varying degrees of surprise and shock, they got an opportunity to be in on the first playtests as I needed subjects on which to conduct experiments (or, at least, to try out the rules). Apocalypse World had come to my attention via social media last year, but I was entrenched in other development at the time (the aforementioned Agents of Oblivion), so I made a mental note to look it up. I don’t know if I ever would’ve, but a chance mention of it by Jason Morningstar last year made me decide to check it out, and I got it last fall and I immediately wanted to make something of my own with it. The game mechanics really spoke to me, so I was compelled to create something with it. My favorite stories were those by Lovecraft and the like, and I thought there was another set of stories to tell within Lovecraft’s milieu, the quieter stories that go generally untold in gaming space, so I set to work.

Stargazer: Most people probably know you from your Savage Worlds products like Agents of Oblivion or Realms of Cthulhu. tremulus on the other hand is based on Vincent Baker’s Apocalypse World. Can you tell us a bit about how you approached working with this system? What are the main differences from a game designer’s standpoint between working with Savage Worlds and Apocalypse World? What system do you think is easier to write for?

Sean: I’ve personally been doing development for Savage Worlds for over eight years, so I know it intimately at this point, so you might think Savage Worlds would be easier to write for, and it is not difficult for me at this point. The challenge with SW is keeping track of all the moving pieces (e.g. Edges, Hindrances, and so on, mainly the Edges) to make certain the introduction of any new elements does not cause havoc or a cascade effect across the rules set. This requires a lot of fine tuning with an eye towards making certain all the elements are in proper balance. You have to make certain to not duplicate existing abilities (within the core rules) or to alter names too much (from a practical standpoint, rather than a mechanical one).

While writing tremulus, on the other hand, I could pick and choose which elements to include or discard, which to rewrite and modify, and the playbooks were an absolute delight to work on, which I deconstructed them and reconciled how they would work within the playspace. The challenge then arises as one constructs more playbooks to make certain each playbook is unique and doesn’t overwhelm any other archetypal playspace (to ensure niche protection). Each playbook has a unique flavor and identity. I’ve built a lot of them now and they all have a home in the system.

Stargazer: As far as I know tremulus has been your first project on Kickstarter. What made you choose this kind of funding? What do you think about crowdfunding in general? Will it change the RPG industry as we know it completely?

Sean: tremulus is our first foray into Kickstarter, certainly, but it is also our first efforts in creating a completely standalone game in a genre most considered already brimming over with possibilities. I didn’t conceive of how it would be received. I had hopes that others would want to tell the types of dark stories I wanted to tell, but we thought it best to cautiously test the waters. Crowdfunding is a lot of hard work. Once I’m on the other side of this, I want to reflect about it for a few days, take a deep breath, and write up a proper RWR (Razorwise Report) on our site to explore it further. I will add a few more observations here, however. Crowdfunding is great. It allows people to see if their ideas have merit. I’d like to go on record as calling it an “Electronic Renaissance”. With the proliferation of tablets, social media, and near-constant (and near instantaneous) connectivity, opportunities abound. Here’s the big secret though. Some things do not change. Hard work is still required. Good ideas are still required. And proper execution is paramount. If something looks easy, like a magician’s trick, you have to appreciate the practice and preparation that is the foundation for success. Will this change the industry? It already has. It’s yet another new frontier. We are seeing things coming to life which have only been in grognards’ dreams (like the return of Steve Jackon’s OGRE ) or may have only lived as a mere flicker in someone’s eye (as a number of board and card games from new and established companies come to mind, like Evil Hat’s upcoming Race to Adventure!). In the end, water finds its own level, and I think trust will become more important in the equation as these new platforms mature.

Stargazer: Let’s get back to tremulus. The Kickstarter page lists a couple of stretch goals that include new playbooks and even completely new playsets on par with Ebon Eaves. Do you plan to release these even if the KS doesn’t reach the stretch goals needed? When will non-backers have the opportunity to get their hands on tremulus?

Sean: The stars are still aligning. We should really wait and see.

Stargazer: The rules used in tremulus are based on AW but has a few differences. Do you plan to use this game engine for later projects?

Sean: We were waiting to see how tremulus would be received, and the people have spoken. We will talk more about our future plans on this at a later date. Perhaps, we should talk again then?

Stargazer: By the way, I remember that you’re also working on a few other projects right now. Can you tell us about those? What’s new with Ravaged Earth for example?

Sean: We’ve recently released the Shaintar: Player’s Beta Guide and have had over two thousand or so downloads to date, so people are digging that. With Ravaged Earth Revised Second Edition, we are waiting for art to come in, and then we can wrap layout. We’ll likely make it available for preorder, like we’ve offered in the past with the launch of our other lines, like Agents of Oblivion. It’s got Martians and mayhem in a complete Plot Point Campaign where our intrepid heroes must battles against Martian Invaders and their Nazi Allies in a race to recover the ancient Martian Sun! (Hmmmm. Maybe I’ve said too much, so we’ll stop here.)
Stargazer: Thanks again for giving me the opportunity to ask you a couple questions. Is there anything you want to add before we wrap the interview up?

Sean: People should check out the daily Razorwise Report on our website for regular updates on what’s currently shaking. Follow me @RealityBlurs on Facebook and Twitter and Google+ and get out there and support tremulus in any way they can. For $20 pledges and greater, people will be getting ALL the stretch goals we hit, so it’s a great opportunity to get in on the ground floor in time for Halloween and the awaiting autumnal darkness. And we also started an audio edition of the Razorwise Report called RWR. People should check out the first episode where I’m joined by Justin Suzuki and we talk about, you guessed it, tremulus in-depth.

Stargazer: It was great having you on Stargazer’s World again! I wish you the best of luck with tremulus! Take care!

Sean: Always a pleasure, Michael. Thanks for getting the word out about tremulus and helping to spread the madness!