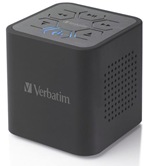 Even though I am currently going through a gaming dry spell, it doesn’t mean that I can’t share a few tricks from my GM toolbox. As I’ve mentioned before I love to use music in my games. Nowadays it’s very easy to carry a lot of music around on an MP3 player or smart phone. I usually have a large variety of background music on my iPhone or iPad that I can easily take with me when I run a game away from home.

The problem is that the speakers on the iPhone and iPad are ok for watching YouTube videos, but they are lacking when it comes to music and I don’t really want to place the phone or tablet in the middle of the table during play. That’s why I picked up a small and easily transportable Bluetooth speaker made by Verbatim several months ago. The device is powered by either two AA batteries or via USB. The sound quality is surprisingly good and it even looks pretty sleek.

By the way, even if your MP3 player doesn’t support Bluetooth you can still connect it to the speaker via a standard audio cable. I think I paid about €40 for the Audio Cube when I bought it back in the day. If you like to play some music during your games and if you are of the travelling kind of GM, the Verbatim Bluetooth Audio Cube (or a similar device) is a must-have!